Roddick powers on with 500th win

(CNN) -- Andy Roddick joined a select group with his 500th career win on the ATP Tour as he dispatched fellow American Sam Querrey in their third round match at the Legg Mason Classic in Washington. 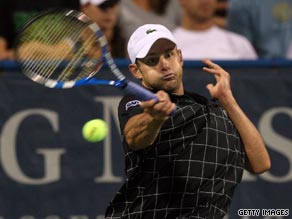 Roddick, returning to the circuit after losing an epic five-setter to Roger Federer in the Wimbledon final, is the 36th player in the Open era to reach the mark.

The top-seeded Roddick came through 7-6 6-4 to reach the quarterfinals of the hardcourt tournament.

"It's a pretty small number of players who have gotten there, an elite group," Roddick told the official ATP Tour Web site www.atpworldtour.com.

"It is validation of consistency in my career."

Roddick fell immediately behind to an early break by Querrey, who was coming off victory in the LA Open at the weekend, but quickly found his strike.

Isner next faces eighth-seeded Czech Tomas Berdych, who rallied for a 4-6 6-3 6-3 win in his third-round match against German Philipp Petzschner.