(CNN) -- Rafael Nadal made his return to competitive tennis after a two-and-a-half month layoff with a doubles victory at the Rogers Cup in Montreal. 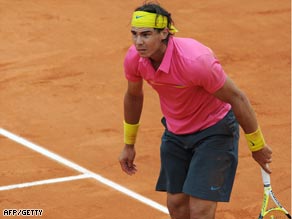 Nadal's last appearance came in a shock defeat at the French Open to Robin Soderling.

Nadal teamed up with fellow-Spaniard Francisco Roig to beat the Serbian pairing of Novak Djokovic and Dusan Vemic 7-5 6-4 in a first round match.

World number two Nadal has not played since losing in the fourth round of the French Open to Robin Soderling, troubled by tendinitis in both knees which caused him to skip his defense of the Wimbledon title.

He will return to singles action in the Masters 1000 tournament with a second match round against either compatriot David Ferrer or Viktor Troicki of Serbia.

But in need of match practice, Nadal entertained a packed Monday night crowd on Court One in a 69-minute victory.

Nadal could meet world number four Djokovic in the semifinals of the hardcourt tournament should both progress in the singles.

The tournament also marks the return to action of Roger Federer, who took the world number one spot from Nadal with his Wimbledon triumph.

The Swiss maestro will play Canada's Frederic Niemeyer, who beat Russia's Igor Kunitsyn 7-5 6-1 in their first round match.

In other action, Germany's Rainer Schuettler beat Florent Serra of France 6-4 6-0 to earn a clash with seventh-seed Jo-Wilfred Tsonga of France in the second round.