Tennis: Nadal happy to be back on court

(CNN) -- Rafael Nadal returned to singles action Wednesday at the Rogers Cup in Montreal but his comeback lasted just 36 minutes as his opponent, David Ferrer, was forced to withdraw with injury. 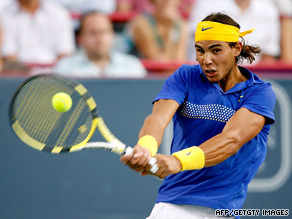 Nadal was on court for just 36 minutes on his singles return.

World No. 2 Nadal -- playing his first singles match since losing in the fourth round at the French Open -- was leading 4-3 by a break in the first set of the second round clash when fellow Spaniard Ferrer was forced to quit with a knee injury.

Nadal, who had already played two doubles matches this week, said he was happy to be back on the court after spending two months on the sidelines with tendonitis in both knees.

"The first movements is tough and hard to move well and to feel confident when you are touching the ball. But that's the normal thing. I must be happy, because I didn't play terrible," said the 23-year-old, according to the ATP's Web site.

"And the next round, I have another chance tomorrow to continuing to improve. Every match, every game is important to feel better for me."