(CNN) -- Andy Murray clinched the No. 2 world ranking in men's tennis despite struggling with his serve in Saturday's semifinal victory over Jo-Wilfried Tsonga at the Montreal Masters. 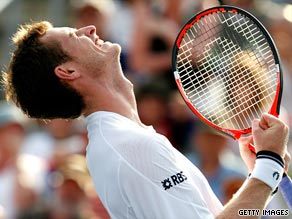 Murray is up to second in the world rankings after reaching the final of the Montreal Masters.

The British third seed won 6-4 7-6 in the Canadian hardcourt event to overtake Rafael Nadal and set up a final clash with sixth-seeded Argentine Juan Martin Del Potro, who came from behind to defeat Andy Roddick in three sets in the other semifinal.

Nadal, who lost the No. 1 ranking to Roger Federer when he was unable to play at Wimbledon due to knee problems, made his comeback in Montreal but was beaten by Del Potro in the quarterfinals on Friday.

"To get past Rafa is incredible," Murray told Sky Sports. "Roger and Rafa have shared the one and two ranking for the last five years. They are so consistent and I didn't know if I was ever going to get there. Just one more to go now."

Murray, who lost to Roddick in the Wimbledon semifinals, needed all his guile to defeat the hard-hitting Tsonga, who shocked Federer in the last eight of the hardcourt tournament.

He took a 3-1 lead but then needed to save three break-points, and failed to serve out at 5-3 as the Frenchman battled bravely.

However, the 2008 Australian Open finalist then gifted Murray two break-points, with the Scot sealing the set on the second with a crosscourt forehand.

Neither player was able to break each other's serve in the second set, despite Murray's poor first-service statistics -- he put in only 42 per cent of his opening efforts, but won 68 per cent of points on second serve.

Tsonga twice claimed mini-breaks in the tie-breaker to lead 3-2 and 5-4, but serving for the set he squandered the chance and then handed Murray his first match-point -- which he saved with a clever lob volley.

Tsonga wasted another set-point and Murray fought back to clinch victory.

"It's difficult to play him, he dictates everything," Murray said. "He hits huge forehands, drop shots and has good feel. You just try to stay solid, and he came up with a few errors at the end."

Meanwhile, Del Potro, who won beat American Roddick in the Washington final last weekend, continued his dominance over the Wimbledon runner-up with a 4-6 6-2 7-5 victory.

Del Potro fired 19 aces in a semifinal victory lasting just over two hours. "I'm so happy to be in another final," the Argentinian told reporters.

"It's a great sensation. Andy and I are both very strong on our serve, but I just played better than him in the important moments of the match."

Del Potro has now beaten Roddick in all three of their matches although he has only beaten Murray once in four matches -- their last meeting at the Madrid Masters in May.