Federer and Murray to clash in Cincinnati

(CNN) -- The world's top two players will meet in the Cincinnati Masters semifinals on Saturday after Roger Federer and Andy Murray progressed from their respective quarterfinals. 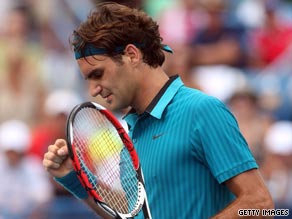 Defending champion Murray was given a major scare by French lucky loser Julien Benneteau in the first match before Federer swept aside former world number one Lleyton Hewitt.

New father Federer, a 6-3 6-4 winner over the Australian, was delighted to advance with the minimum fuss.

"My expectations were 'so so', let's say," he told Sky Sports. "Because of the twin girls, the focus was elsewhere for a few weeks.

"I practised hard, obviously... I wouldn't have come over to the North American tour without expectations. It's good, the number of matches I've had now. I'm feeling OK so far and hopefully I can keep going and playing well."

Top seed Federer needed just 69 minutes to see off Hewitt, who was clearly struggling throughout with a right knee injury.

"I didn't pay attention to his knee," added the Swiss. "I just thought he had not a very good day at the office. I'm happy I was able to came through because Lleyton is always a tough customer."

Murray had been an overwhelming favorite heading into his quarterfinal tie, but found himself staring at a shock exit when he conceded his first set of the week 6-4 and then went 2-0 down in the second.

However, the third seed responded brilliantly with three breaks of serve to level the match and then stormed through the third set to prevail 4-6 6-3 6-1.

Murray admitted afterwards that a mammoth 53-shot rally in game three of the second set, which ended with Benneteau missing a smash, had been the turning point.

"That unbelievable rally, 53 shots or something, that really changed the match for me," he said. "Physically he was struggling a little bit after that."

Murray added: "I served terrible in the first set -- six doubles. The ball was blowing all over the place.

"He obviously played well. It was tricky conditions. I was shanking a lot of balls at the start. I was hitting the ball really clean from the back of the court but leaving a lot of balls short so I ended up doing a lot of running, which wasn't really the plan going into the match."

Nadal was relatively untroubled in seeing off Czech Tomas Berdych 6-4 7-5 in one hour and 41 minutes, with a pair of service breaks enough to seal the win.

Djokovic, meanwhile, ousted ninth seed Gilles Simon by the same score. The Serb converted three of nine break points on the way to victory inside 90 minutes.