THE OVAL, LONDON, England -- England regained the Ashes with a 197-run victory over Australia on the fourth day of the fifth and deciding Test to spark scenes of joyous celebration at The Oval on Sunday. 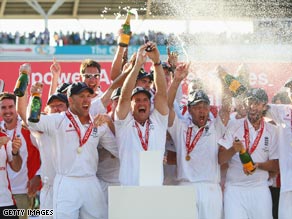 Strauss and his men hold the Ashes aloft after completing a 2-1 series win over Australia.

Michael Hussey scored a defiant 121 to hold up the home side, who had been strong favorites after setting Australia a near-impossible 546 for victory.

But he was the last wicket to fall, caught by Alastair Cook at short leg off the bowling of Graeme Swann to give England a 2-1 series victory with two matches drawn.

A special day at The Oval in pictures

England had regained the Ashes on home soil in a classic series in 2005, but the world's former top-rated Test team won them back in Australia 18 months later.

Australia had been 80 without loss overnight, but England kept plugging away as wickets fell at regular intervals.

There were also two decisive run outs, with Andrew Flintoff throwing down the wicket to send back Australian captain Ricky Ponting for 66.

It was the key dismissal and a fitting end to Flintoff's international Test career as he retires at the end of the match.

The other run out involved Michael Clarke, Australia's leading run scorer in the series.

He clipped a ball from off-spinner Swann that deflected off the boot of Cook at short leg to England captain Andrew Strauss at leg-slip, who hit the stumps with a sharp under-arm throw.

After Clarke's departure, England closed remorselessly on victory and two wickets in successive balls from 2005 Ashes hero Steve Harmison left Australia nine wickets down and teetering on the edge.

Swann supplied the finale, claiming the first and last wickets to fall on a historic day.

His initial breakthrough saw Simon Katich sent back for 42 and in the next over Stuart Broad trapped fellow opener Shane Watson for 40.

Broad was named man-of-the-match for his decisive five-wicket haul in Australia's first innings as they were skittled for 160 to leave England with a lead of 172 which gave them a stranglehold on the match.

After being thrashed in the fourth Test at Headingley by an innings and 80 runs, England went into The Oval showdown needing a victory to win back the Ashes with Australia merely needing to avoid defeat.

"This is a very special moment for all of the players," said Strauss, who took over the England captaincy at the start of the year when Kevin Pietersen resigned after a public row with then coach Peter Moores.

"They have had to dig very deep in a very hard series and they have showed character, determination and fight."

The two teams will now take part in a Twenty20 and one-day international series, but Flintoff will be missing after the England and Wales Cricket Board announced later on Sunday that the all-rounder is to have an exploratory operation on his troublesome right knee.

Flintoff will also be ruled out of the Champions Trophy and reports suggested he could face another lengthy layoff.