Federer back to his best with Cincinnati win

(CNN) -- Roger Federer sent out an ominous message to his rivals by claiming the Masters 1000 tournament in Cincinnati with a straight sets demolition of Novak Djokovic in the final on Sunday. 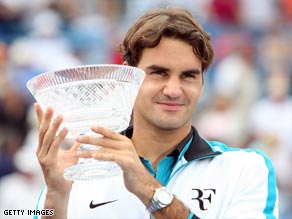 Federer was getting his hands on his 61st career title after an emphatic win.

Federer was playing his second tournament since returning to the ATP Tour circuit after becoming the father of twin girls and was back to his peerless best ahead of the U.S. Open at Flushing Meadow next week.

The Swiss maestro swept aside world number two Andy Murray in straight sets in their semifinal match up and afforded Djokovic the same treatment with a 6-1 7-5 victory to claim his 16th Masters crown.

Djokovic had played superbly to dispatch former world number one Rafael Nadal in their semifinal and had not dropped a set all week, but had no answer to the world number one.

Federer breezed through the opening set, but encountered more resistance in the second, having to save a set point as he served at 4-5 down.

But it was saved with a fine service and in the next game he broke Djokovic for the fourth time in the match.

Federer duly served out the match to love, claiming his third Cincinnati title as his Serbian opponent netted a return after one hour and 30 minutes.

It was his 61st career title.

He heads into his defense of the U.S. Open crown having won the last two grand slams at the French Open and Wimbledon to take his tally to a record 15 and as warm favorite.

Following his Wimbledon triumph, Federer took an enforced break as his wife Mirka gave birth to Charlene Riva and Myla Rose, but returned to be beaten in the quarterfinals in Montreal by Jo-Wilfred Tsonga.

Murray claimed the title, but met his match against a much-improved Federer in Cincinnati.