Who's the greatest F1 driver of all time? 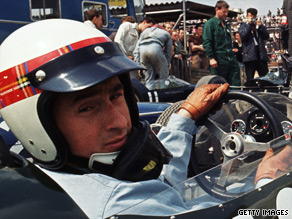 Three-time F1 champion, Jackie Stewart back in his heyday.

"My hero, and the man I most respected and probably still do is Juan Manuel Fangio." Stewart told CNN.

It's not misty-eyed nostalgia for a bygone era that persuades "The Flying Scot," as Stewart became known. And it wasn't just Fangio's tally of world titles that convinced Stewart; it is the manner in which the Argentine legend saw off his rivals. Who do you think is the greatest?

"Fangio won five world championships almost in a different car every year. He had the dignity, the style and the ability," Stewart explained.

What's more, as Stewart points out, Fangio didn't start racing in Formula One until he was 39-years-old, and whether driving a Ferrari, Lancia, Maserati or Mercedes, he kept on winning races.

Though Fangio was the greatest, Stewart rated fellow countryman Jim Clark as the best driver he raced against.

"His batting average was very good and he didn't race in too many grands prix." Clark -- who was tragically killed racing at Hockenheim in 1968 -- won 25 of his 73 Formula One races. Stewart's record is comparable, winning 27 from 100 starts.

It's this win to race ratio that really separates the good from the great Stewart believes.

"I'm on record as saying winning is not enough, it's easy to win. Most people win. To be successful, like a Fangio or a Jim Clark is more difficult."

As much as Stewart admires seven-time champion Michael Schumacher, he's finds it hard to put the German in the same league as Fangio or Clark.

"Not to take anything away from him [Schumacher], but his car was so dominant and his team had so much in terms of money and resources," Stewart said. "Although he has won more, his batting average isn't as good -- from starts to wins -- as Fangio or Clark."

Stewart, who retired from Formula One in 1973, is a great admirer of the current crop of drivers and he singled out Lewis Hamilton and Sebastian Vettel as potential legends of the future. But they have a long way to match Stewart's record of three Drivers' Championships, let alone Fangio or Schumacher.

Do you agree with Jackie Stewart? Or do you think that Michael Schumacher is the greatest? Have we missed anyone you think deserves special mention? Use the Sound Off box to have you say.