(CNN) -- Andy Murray's bid to reach a second consecutive U.S. Open final has been made harder after the world number two was handed a difficult draw for the final grand slam event of the year. 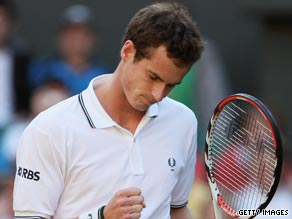 Murray faces a tough battle if he is to emulate his run to last year's U.S. Open final.

The second-seeded Briton -- the runner-up to Roger Federer in last year's final at Flushing Meadows has been placed in the same half of the draw with the man he replaced as world number two, third seed Rafael Nadal, putting them in line for a repeat of last year's semifinal.

Yet Murray will have to have to get past the big-hitting Ivo Karlovic, Marin Cilic and Juan Martin del Potro if he is to even reach that stage.

Murray's first-round opponent will be Latvia's Ernests Gulbis, against whom he has a 3-0 record, with their last meeting coming in the second round at Wimbledon when Murray won in straight sets.

Croatia's Karlovic is a potential third round opponent, and either Switzerland's Stanislas Wawrinka, seeded 19, or No.16 Cilic, another Croatian, could face Murray in round four.

Argentina's rising talent del Potro is Murray's possible quarterfinal opponent with Nadal seeded to face him in the last four.

Meanwhile, top seed Federer, who beat Murray last Saturday in the semifinals of the Cincinnati Masters tournament, is coming off victories at both the French Open and Wimbledon that took his total career grand slam titles to 15, surpassing Pete Sampras' record.

The Swiss,who became a father for the first time five weeks ago when wife Mirka gave birth to twin girls, will begin his bid for a sixth straight U.S Open title against American wild card Devin Britton with Australia's Lleyton Hewitt, seeded 31, a possible third-round opponent.

American James Blake (21) or Spain's Tommy Robredo (14) are possible opponents in round four and eighth seed Nikolay Davydenko a potential obstacle in the last eight.

The bottom quarter of Federer's half of the draw is highlighted by fourth seed Novak Djokovic, who was beaten by the world number one in the Cincinnati final, and fifth seed Andy Roddick, the American who took the Swiss to a 30th game in the final set of the Wimbledon men's singles final before eventually losing out 16-14.

Women's top seed Dinara Safina has been drawn to play Australian wild card Olivia Rogowska in the first round and is seeded to face No.5 Jelena Jankovic, last year's runner-up, in the quarterfinals.

Fourth seed Elena Dementieva is seeded to face fellow-Russian Safina in the semifinals, although former champion and compatriot Maria Sharapova, seeded 29th, is a possible third round opponent for Dementieva.

Second seed Serena Williams begins her title defence against fellow-American Alexa Glatch, a wild card, with Russia's Vera Zvonareva her highest seeded opponent at number seven in their quarter of the draw.

An all-Williams sisters semifinal is on the cards as third seed Venus Williams is in the same half of the draw, although her path to the last four could be complicated as wild card and 2005 champion Kim Clijsters is in her quarter and a potential fourth round opponent.