(CNN) -- Former world number one, Rafael Nadal, has exclusively told CNN his levels of fitness ahead of the U.S. Open are "better than expected," boosting his chances of becoming only the seventh man in history to win a career grand slam with victory at Flushing Meadows. 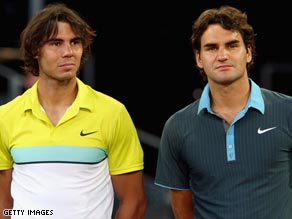 Titans of tennis, Rafael Nadal (left) and Roger Federer (right), will be both keen to capture the U.S. Open title.

The Spaniard, who dropped to third-best in the world after being sidelined for over two months with a knee injury, said he was pleased with his physical preparation for the major that starts on August 31.

"I'm very happy as I arrive here feeling better than I expected I would a few weeks ago," the 23-year-old said, who came through two warm-up events recently for the hard-court tournament without any further reaction.

"I had a really good time in Cincinnati and a good tournament in Montreal.

"But playing in New York is always a special feeling and it's the last major of the season so I hope to have a good event," Nadal said.

Nadal, who was knocked out of the U.S. Open at the semifinal stage by Britain's Andy Murray last year, said he considers himself lucky in terms of injuries that have affected his career.

"If you're playing at 100 percent, always at the limit, it is normal that you get injuries. I had nearly four years of perfect fitness while playing a lot of matches. Injuries sometimes happen so you have to accept that and try and recover as quickly as possible."

But the Majorca-born player admitted it has been difficult to cede ground to his rivals while unable to play and he is keen to prove a point in New York.

"Roger has done an unbelievable job - he deserved the 15 grand slams and I can't congratulate him enough. I miss the competition but not the challenge of playing Roger!

"The atmosphere in New York is great, the crowd is more educated than many other events, so I like this kind of energy and electricity and I have high expectations of playing well here."

Current world number one and defending champions Roger Federer also spoke to CNN about his optimism ahead of the last major event of the calendar.

"I feel great, a lot has happened in my personal life, as I have twin babies now, and this is their first trip abroad they're only five weeks old. I won in Cincinnati so things are looking good.

"The main threats are Nadal, Murray and (Novak) Djokovic because they have done well here in the past - but we also have players like (Jo-Wilfried) Tsonga and (Juan Martin) Del Potro coming through so I think it could be more wide open than normal."

Despite the difficult opponents standing in his way the Swiss still had his eye on capturing his sixth straight title in America and extending his record of 15 grand slam wins.

"It would be a dream come true to win six in a row here. It's a dream that I always thought was impossible but I'm only a few matches away now so I'm close," he said.