(CNN) -- Ferrari's Kimi Raikkonen claimed his fourth Belgian Formula One Grand Prix victory in five years at Spa to end an astonishing run of 26 races without a win for the 2007 world champion. 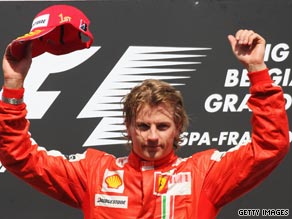 Raikkonen was hounded all the way for the majority of the race by pole-sitter Giancarlo Fisichella, who gave Force India their first points in F1 after 30 races with a second-place finish.

In a chaos-filled race, British duo Jenson Button and Lewis Hamilton crashed out on the opening lap in an accident that also accounted for the Toro Rosso of Jaime Alguersuari and Renault's Romain Grosjean.

Despite Button failing to score points for the first time this season, the 29-year-old still has a 16-point world championship cushion over Brawn GP team-mate Rubens Barrichello, who was seventh, with Red Bull's Sebastian Vettel is now 19 points down after he came home third.

After his 18th career win, Raikkonen told reporters: "We haven't brought new parts for the last few races as we are looking at next year. But my aim was always still to win a race because we are aiming for third in the (constructors') championship.

"We probably weren't the fastest in terms of lap time, but we were able to keep everybody behind us. Hopefully we can now win more."

The Finn is fifth overall, 38 points behind leader Button and 17.5 adrift of fourth-placed Australian Mark Webber.

Fisichella was delighted and disappointed in equal measure as he said: "It's a great result for us.

"It's a great day but I was quicker than Kimi and I'm a little bit sad because maybe I could have won the race as I was keeping pace with his car."

Vettel believes anything is possible now over the remaining five races as he, teammate Webber and Barrichello continue to reel in Button.

"If you look at the championship it's a good result," remarked Vettel. "We lost too much ground in the first stint because of the guys ahead, but in the second and third the car was fantastic. It was a pleasure to drive.

"We've managed to take points out of the Brawns, so overall a big thank you to the team and to Renault (engine providers) after all the trouble we've gone through recently. "It shows we are back."

Webber finished out of the points in ninth, with the BMW Sauber pairing of Robert Kubica and Nick Heidfeld claiming fourth and fifth respectively.

Raikkonen's teammate Luca Badoer was again last of the 14 drivers who finished the race, with the Italian continuing to struggle as stand-in for the injured Felipe Massa.

His future with the Italian marque will be decided by Wednesday, the team said after Sunday's race.

Two-time world champion Fernando Alonso retired after 26 laps due to a problem with a front wheel on his Renault, having been third at one stage.

Toyota's Jarno Trulli, who started second on the grid, also retired after 21 laps after earlier pitting for repairs.