(CNN) -- World number one Dinara Safina and most of the top women's seeds at the U.S. Open coasted through to the second round, but Ana Ivanovic was knocked out by Ukraine's Kateryna Bondarenko in a playoff thriller that was decided by the last point. 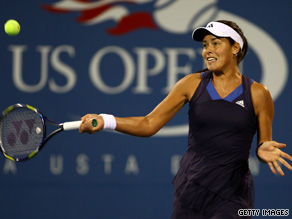 Ana Ivanovic returns a shot against Kateryna Bondarenko during day two of the 2009 U.S. Open.

Safina, who crashed out of the second round of the Rogers Cup in Canada in late August, survived a scare from Australian teen Olivia Rogowska, winning 6-7 (5-7), 6-2, 6-4.

The loss for Ivanovic, 6-2 3-6 6-7, comes after a disappointing summer. She exited the Rogers Cup in the second round in August and left her fourth-round Wimbledon match in June due to an injury.

Other women's seeds who earlier made it to the second round include Belgian ace Kim Clijsters and the Williams sisters.

Other top men's seeds advancing to the second round include world number one Roger Federer and Robin Soderling. Rafael Nadal begins play on Wednesday.