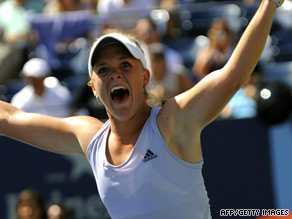 Oudin, who will turn 18 later this month, caused a shock at Wimbledon earlier this summer when she knocked out Jelena Jankovic in the third round.

And the world number 70 added the 2008 Olympic champion to her list of victims at the Arthur Ashe Stadium with a 5-7 6-4 6-3 second-round victory over the 2004 U.S. Open finalist, who is still searching for her first grand slam success.

Her victory earns Oudin a mouthwatering third round match against Maria Sharapova.

"I certainly think I'm playing a lot better than I was when I first got back," she told reporters.

"I feel like the belief in the game, the confidence, is coming back."

Oudin will offer a tougher challenge than her first two opponents and is relishing the support she is getting at Flushing Meadows.

"I don't even know what to say right now. I'm so excited. You have no idea," Oudin said after getting a standing ovation after her victory.

"Going into the last point I was thinking I might not get another chance so I just had to go for it with a big serve and I was lucky it went in. The crowd supporting me helped me get through," she added.

Meanwhile, fifth seed Jelena Jankovic was defeated in a shock loss to unseeded Yaroslava Shvedova of Kazakhstan, 3-6 7-6 6-7. Shvedova had 45 winners to Jankovic's 27 and fired off six aces to Jankovic's four.

World number one Dinara Safina, who is still searching for her first grand slam crown, rallied to defeat Germany's 67th-ranked Kristina Barrois 6-7 6-2 6-3 in her second round match, despite making 38 unforced errors and double faulting 15 times.

In a near-replay of her opening-round struggle against Australian teen Olivia Rogowska, Safina endured another roller-coaster performance.

"I was starting to pay attention better in the second set," Safina told reporters. "She's a very good player. She put back everything."