(CNN) -- Serena Williams moved a step closer to defending her U.S. Open title, although she had to produce her best tennis to see off Spain's Maria Jose Martinez Sanchez. 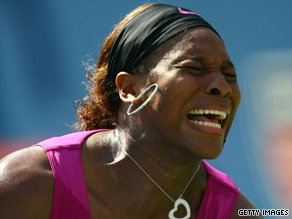 The 27-year-old American won 6-3 7-5 to secure a fourth-round showdown with Slovakian Daniela Hantuchova, who eased past another American, Vania King, 6-2 6-2.

Second seed Williams had to fight back from 1-3 down in the final set to claim victory and praised her opponent afterwards. "She was serving really well especially in the second set, but I just kept on fighting," the American told reporters.

"It's not often that I play someone that serves and volleys like that.

"Playing doubles here helped with that. I got super-pumped when 1-3 down in the second set as I knew I had to recharge my batteries."

Serena will be joined by sister Venus, who survived a tough challenge from Magdalena Rybarikova of Slovakia, 6-2 7-5.

In-form Italian Flavia Pennetta is also through to the last 16 after crushing Canada's Aleksandra Wozniak 6-1 6-1.

Pennetta won titles at Palermo in July and Los Angeles last month and comes into New York in the best form of her career.

She defeated Romania's Edina Gallovits 6-0 6-4 in the first round and then whitewashed India's Sania Mirza 6-0 6-0 in the second round.

Pennetta will next play seventh seed Vera Zvonereva for a place in the quarterfinals, where she could run into favorite Williams.