Roddick out in five-set thriller; Federer fends off Hewitt

(CNN) -- Fifth seed Andy Roddick was knocked out of the U.S. Open on Saturday by unseeded American John Isner in a five-set, nearly four-hour thriller at Flushing Meadows. 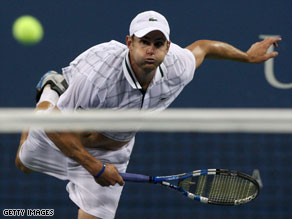 In earlier play, Roger Federer came from a set down to beat former world number one Lleyton Hewitt, who showed glimpses of his glory days by taking the opening set. But the top seed hit back to round out a 4-6 6-3 7-5 6-4 victory on the Arthur Ashe Stadium Court.

The victory means Federer will keep his world number one status whatever the eventual outcome of the final grand slam of the season.

Federer is aiming for a sixth straight title in New York, and he quickly reacted to the growing threat posed by Hewitt, who is battling his way back up the rankings after an injury layoff last year.

The Swiss will play Tommy Robredo of Spain -- who defeated American James Blake 7-6 6-4 6-4 -- as he bids to become the first player since Bill Tilden in the 1920s to win sixth U.S. Open titles in a row.

Fourth seed Novak Djokovic later joined Federer in the fourth round after a thrilling 6-7 6-3 7-6 6-4 win over American hope Jesse Witten.

Djokovic was struggling on the Louis Armstrong Court after falling behind to the burly qualifier, but he finally edged ahead in a tense third set tiebreak before a single break saw him close out the match in just short of three and a half hours.