Safina and Sharapova crash out of U.S. Open

(CNN) -- Top seeds Dinara Safina and Maria Sharapova crashed out of the U.S. Open to teenagers in each of their marathon three-set matches on Saturday in major upsets at Flushing Meadows. 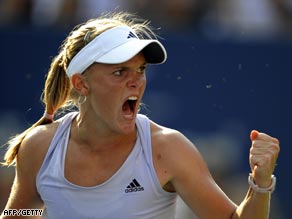 Safina fell to 19-year-old Petra Kvitova of the Czech Republic, 4-6 6-2 7-6. The third set lasted 73 minutes as the pair battled it out, with the unseeded Kvitova knocking out 22 winners compared to five for Safina.

It is the second U.S. Open for Kvitova, who exited in the first round last year.

Another teen who served notice was Melanie Oudin, who put out the former world number one Sharapova 3-6 6-4 7-5 to reach the last 16.

She wept tears of joy after completing her battling victory over 2006 champion Sharapova on the Arthur Ashe Stadium Court.

Oudin, who is racing up the rankings and who shocked Sharapova's fourth-seeded Russian compatriot Elena Dementieva in the second round, put out Jelena Jankovic at Wimbledon earlier this year but was assisted by a string of errors by her illustrious opponent.

Sharapova served a staggering 21 double faults and made 63 unforced errors to fatally undermine her challenge.

Oudin will now play another Russian, 13th seed Nadia Petrova, for a place in the quarterfinals.

Sharapova, who only returned to the circuit after shoulder surgery earlier this summer, called the trainer during the deciding set, receiving massage treatment to her upper arms.

"I think I got lucky," Oudin told reporters.

"She double faulted a couple of times. I was putting pressure on her second serves. I served a pretty good game in that last game. I knew I had to make some first serves."

French Open champion Svetlana Kuznetsova continued her fine run with a 6-4 6-2 win over Latvia's Anastasija Sevastova as she bids for a second U.S. Open crown.