(CNN) -- Former women's champion Kim Clijsters has claimed her biggest victory since her comeback from retirement after beating third-seed Venus Williams at the U.S. Open on Sunday. 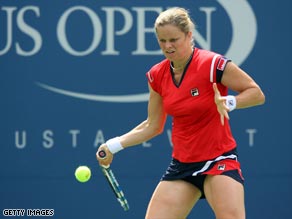 Clijsters reached the quarter-finals with a 6-0 0-6 6-4 victory over Williams in one hour 42 minutes at Arthur Ashe Stadium.

She now faces a quarter-final date on Tuesday against China's Li Na, the 18th seed, after she defeated Francesca Schiavone of Italy 6-2 6-3.

The second seed will now play Italian Flavia Pennetta for a place in the quarterfinals after she beat seventh seed Vera Zvonareva of Russia.

It was a routine win for the tournament favorite Serena -- in stark contrast to the New York hopes of Russian trio Dinara Safina, Maria Sharapova and Elena Dementieva who have all crashed out of the tournament in the last couple of days.

Williams, 27, broke serve in the sixth and eighth games of the first set and the second set was one-way traffic as the champion won 10 games in a row to march through in just 64 minutes.

In four matches, Williams has yet to drop a set and has lost just 17 games.

"I played well and stayed focused," she told reporters. "I traditionally play really well in fourth round matches so I want to to keep this level and stay focused for my next match.

"Everyone is playing so well and some of the seeds have been struggling all summer and you can't underestimate anyone. Daniela is such a good player and I knew I had to be serious as she always gives me trouble," she added.

Williams took her grand slam record for the year to 22-1, her only loss being to Svetlana Kuznetsova in the French Open quarterfinals.

She won both the Australian Open and Wimbledon crowns taking her career Grand Slam total to 11.