LONDON, England (CNN) -- Technology is changing golf in such a way that the next generation of players could be learning their skills on computer screens rather than golf greens. 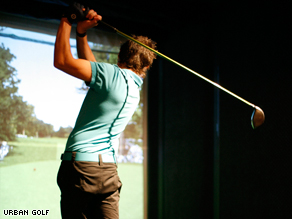 South Korea's Y.E. Yang became the first Asian-born male winner of a major when he won the U.S. PGA Championship but there is a possibility the region's next star will come from cyber golf.

There are an estimated 3.5 million golfers in South Korea but many of them have never seen an 18-hole course out in the open.

Their game lives in the virtual world - forced indoors because most of the 260 golf courses in South Korea are expensive and oversubscribed.

A round of virtual golf will cost between $20 to $30 and the format has seen a proliferation of users - just over five years ago there were 300 golf cafes but now there are over 3,000 operating some 12,000 simulators.

Youngchan Kim, president of Golfzon who own around 60 percent of the simulator market, revealed that the continuing success of virtual golf lies with its accessibility to the masses.

"In Korea it is very expensive to play golf in the field and it requires a lot of time. So the expensive and time-consuming factors were resolved through virtual golf," he told CNN's Living Golf.

"Virtual golf or golf cafes are very popular in Korea at the moment. It's only about 10 percent of what it regularly costs to play in the field."

Simulated golf is a fast-growing pastime with industry officials estimating seven out of every 10 simulators sold globally are installed in South Korea.

Indeed Golfzon confirmed that broadcasting live virtual golf tournaments is the next step to satisfy the thirst for the sport in the region - although its popularity is not restricted to South Korea.

James Day, director and founder of Urban Golf in the UK, admitted that virtual golf has a strong appeal outside of Asia and attract over 1000 customers a week to their two branches in London.

"Golf is changing at the moment and virtual golf has rewritten the rules of the game. For example, we don't have a membership or a dress code and we provide the equipment so it is accessible to more people," Day explained.

"There is a huge appetite for virtual golf and with over 500 people coming through the door at our two sites means we are set to open a two new places in the future to cope with the demand.

"The only disappointing thing is that there is has been little recognition by some of the official bodies within the game who do not seem as enthusiastic to embrace it.

"The ball tracking technology is exceptionally accurate and it is now at the level whereby it will reach a 100 percent accuracy in the next few years so virtual golf is becoming a serious practice option for professionals."

Dr Mark Smith, head of the Golf Education and Research Group at the University of Lincoln, admitted that a future talent could emerge having developed their game primarily through virtual play.

He told CNN: "Nothing beats playing golf in its purest form out on a proper outdoor course but the core skills can be developed, analyzed and improved on virtual machines.

"In theory there is nothing to prevent a player from rising through the virtual world and developing a level of ability with transferable skills to the outdoor game.

"And with the kind of statistics being talked about in Asia it would not be a surprise if a player came through the ranks whose first taste of the game had been on a computer screen rather than the course green."