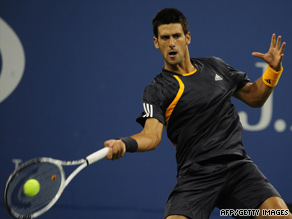 The Serbian's win on Monday set up a quarterfinal clash with 10th seed Fernando Verdasco, with the Spaniard earlier dispatching John Isner of the United States 4-6 6-4 6-4 6-4.

Earlier, top seed and defending champion Roger Federer cruised into the quarterfinals after a 7-5 6-2 6-2 win over 14th seed Tommy Robredo of Spain.

Federer will now play Sweden's Robin Soderling, the third grand slam in succession that the two will have met -- including the French Open final.

The Swiss world No. 1 is seeking to qualify for the semifinals of a grand slam for a record 22nd consecutive time.

"Robin has got a big game, and we had the final of the French Open -- one of the most important matches of my career -- so it's nice to play him again," Federer told reporters of his forthcoming clash with Soderling.

"He has got some great shots and is strong off the baseline."

Federer, 28, is bidding to become the first player since American Bill Tilden in 1925 to win six straight U.S. Open crowns.

He would also make it three out of four grand slam titles this year and take his career haul to 16 -- two clear of second-best Pete Sampras.

The 12th-seeded Soderling, who has not beaten Federer in 11 previous meetings, progressed to the last eight at the expense of eighth seed Nikolay Davydenko.

The Russian was forced to retire with a left thigh injury while trailing 7-5 3-6 6-2.

In stark contrast to the women's tournament, seeds have dominated among the men with a record of 14 making it into the last 16.

Fifth seed Andy Roddick and ninth seed Gilles Simon have been the only casualties.