(CNN) -- Novak Djokovic has reached the U.S. Open semi-finals for the third year in a row after beating Fernando Verdasco in four sets at Flushing Meadows.

The fourth seed from Serbia beat his Spanish rival 7-6 (7/2) 1-6 7-5 6-2 at Arthur Ashe Stadium, giving him his first semi-final berth in a Grand Slam this year, the Press Association reports. 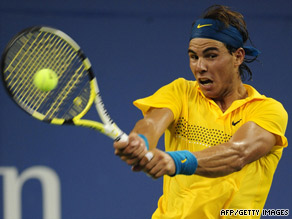 Nadal, the six-time grand slam winner and reigning Australian Open champion, has been coming off a two-month lay-off due to knee tendinitis, a break that kept him from defending his 2008 Wimbledon crown.

He also showed no signs of the stomach injury which troubled him in the previous round, but served conservatively with a maximum speed of 119 mph (192 kph) compared with 131 mph (211 kph) by Monfils.

But Nadal had no double faults against four for his opponent and showed signs that he is coming back to his best.

"I am improving every day. After a month and a half or two months, it is not easy coming back," Nadal told reporters.

Briton Murray, who was seeded to face holder Roger Federer in a repeat of last year's Flushing Meadows final, looked lackluster throughout the match as Cilic comfortably reached his first grand slam quarterfinal with a 7-5 6-2 6-2 victory in two hours and eight minutes.

Cilic will now face Argentine Juan Martin Del Potro for a place in the semifinals, after the sixth seed secured a comfortable 6-3 6-3 6-3 victory over Spanish 24th seed Juan Carlos Ferrero.

"I played very well and Andy was missing a lot," Cilic told reporters. "I don't think he was playing his best. It feels amazing to reach the quarters," added the 20-year-old, who is the youngest player in the world's top 20.

Murray had beaten Cilic in their three prior meetings, most recently in the fourth round of this year's French Open, but looked off-form from the start.

The Briton had come back from two sets to love down at the same stage of last year's tournament to beat Austrian Jurgen Melzer en route to his first grand slam final.

But he only won four games out of the last 18 to slump out on his favorite hard-court surface, refusing to use a wrist injury as an excuse for his shattering exit.