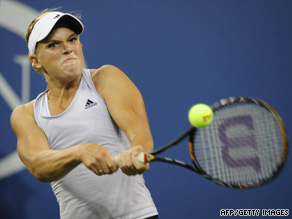 Melanie Oudin of the United States returns a point to Danish player Caroline Wozniacki on Wednesday.

The 70th seed's loss on Wednesday night ended a blockbuster performance that included ousting fourth seed Elena Dementieva and former world No. 1 Maria Sharapova, among others.

Oudin, 17, of Marietta, Georgia, is the youngest American since Serena Williams in 1999 to reach the quarterfinals.

"I knew that she had a great forehand and that she's running well," Wozniacki told official Web site usopen.org.

"So I just wanted to keep her mostly on her backhand side, but also make her run to her forehand."

Oudin said Wozniacki -- the first Dane to reach the semis of a grand slam since the Open era began in 1968 -- put her under pressure to force errors.

"She plays incredible defense," Oudin said. "She makes me hit a thousand balls and is a really great player. I don't know what else I could have done.

"I could have been more consistent and been more patient, but she really made me think out there and made me have to hit a winner on her to win the point."

Meanwhile, the 19-year-old Wickmayer beat Kateryna Bondarenko of Ukraine 7-5 6-4 after coming from 4-1 down in the second set to join compatriot Kim Clijsters in the last four.

Earlier, world No. 2 Williams stayed on course for her third grand slam title of the year with a 6-4 6-3 win over Italy's Flavia Pennetta in their quarterfinal.

Williams, who is bidding to win the Flushing Meadows crown for the fourth time, will now meet former champion Clijsters in an eagerly-awaited last-four clash.

Unseeded Clijsters beat China's Li Na in straight sets to continue her incredible comeback to tennis after a two-year layoff.

"I'm just glad I got through this," Clijsters told reporters. "I tried to stay focused on my own game, mix it up and stay aggressive and winning those important points."

Clijsters won her only grand slam title at Flushing Meadows in 2005 but injury ruled out her defense the following year, and in May 2007 she surprisingly walked away from the sport, saying she was tired of the injuries and lifestyle.

During her time off, she married and had a baby daughter, but 18 months after giving birth, she came blistering back to action at the start of August with a view to making her mark again at the U.S. Open.

Clijsters is the first unseeded player to reach the semifinals at the hardcourt tournament since Russia's Dementieva in 2000.

She has also matched the best run by a wildcard at New York, matching Jimmy Connors, who reached the semis in 1991.

But she will go into her match against defending champion Williams with the statistics against her, having won just one of eight clashes against the three-time U.S. Open winner.

Williams is also in imperious form as she bids for a 12th grand slam title, brushing aside dangerous outsider Pennetta by breaking her service to love to take the opening set.

A single break in the sixth game of the second set sealed victory for the defending champion to delight the night session crowd.