(CNN) -- The Williams sisters have reached the women's doubles final at the U.S. Open for the first time in a decade after being taken to three sets on Thursday. 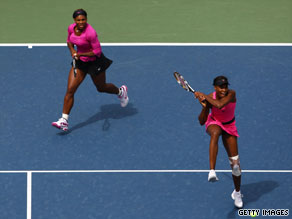 Serena Williams, back left, watches as Venus hits a backhand during their doubles semifinal victory.

The American fourth seeds will next face the winner of Friday's semifinal between defending champions Cara Black and Liezel Huber and third-seeded Australians Samantha Stosur and Rennae Stubbs.

The siblings won the doubles at this year's Australian Open and Wimbledon, and will be seeking their 10th grand slam title as a pairing.

The windy conditions made it difficult for both pairings, with six breaks of serve in the third set.

"It was probably the most windy conditions I've ever played in," Serena told the official U.S. Open Web site. "It was tough, but everyone had to play in the same conditions."

World No. 2 Serena faces Kim Clijsters in the first singles semifinal on Friday, but older sister Venus was knocked out by the Belgian in the fourth round.

"It was a tougher day with the wind, but we did the best we could," Venus said. "I wish I could have made more shots to make things easier, but Serena is in excellent shape. She'll be ready."

Meanwhile, Black suffered defeat in the mixed doubles final on Thursday as the Zimbabwean and Indian partner Leander Paes failed to defend their title.

The U.S. duo had never before played together at one of tennis's four main tournaments, and had been handed a wildcard entry.