(CNN) -- Roger Federer exclusively told CNN that the stunning shot he executed in his U.S. Open semifinal against Novak Djokovic was the best of his career. 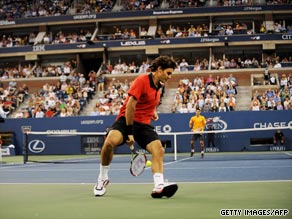 Roger Federer hailed his stunning shot against Novak Djokovic as the best of his career.

The world number one produced a near-faultless performance to defeat fourth seed Djokovic in straight sets to reach his sixth consecutive U.S. Open Final at Flushing Meadows, but it was an outrageous shot to set up match point that will be most remembered.

It came with Djokovic serving at 6-5 down in the third set. At love 30-0 up Federer dashed back to the baseline and hit a winner through his legs that flew over the net and past Djokovic into the corner for match point.

"I think it was the greatest shot I have ever hit in my life," Federer told CNN.

"I have hit some good ones over all the matches I have played, but I think this one, especially under the circumstances at love 30-up and with having chance to maybe clinch the match, was amazing.

"I got a standing ovation and people went crazy -- here in New York the crowds are fantastic -- as it was the perfect shot to hit, at exactly the right time, and I can't believe I pulled it off."

Federer also revealed he is producing his best tennis because he is under less pressure than perhaps he was at the same time last year.

At this stage in 2008 Federer had not won a grand slam but after winning the French Open and a historic 15th major at Wimbledon this time round he admitted he is more relaxed. "I have a little bit less pressure to prove myself after reaching the 15 Grand Slams everyone was talking about and I also I won in Paris," he added.

"Getting through the pregnancy with my wife Mirka and having two beautiful daughters is also something that relaxes you for sure. But at the same time when you walk out on center court there will always be a certain type of pressure which will be there for the rest of my career.

"I just have to make sure I handle it correctly. I always play my best tennis towards the end of a tournament and I am happy that it is continued in this match after everything that has already happened this year."

Federer will play Argentina's Juan Del Potro who reached his first grand slam final after he crushed Rafael Nadal in the other semifinal.

The sixth seed blew Nadal away at the Arthur Ashe Stadium, taking two hours and 20 minutes to take a comprehensive 6-2 6-2 6-2 victory.