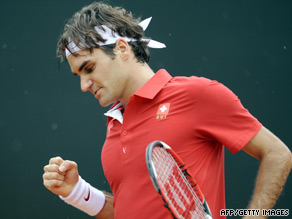 Roger Federer's victory on Sunday ensured that Switzerland will play in the World Group of the Davis Cup.

The world No. 1, who was rested for Saturday's doubles -- which the Swiss lost -- gave his nation an unassailable 3-1 lead in the playoff ahead of the second reverse singles match.

But Federer, who rushed to Italy just 32 hours after his epic U.S. Open final defeat by Juan Martin Del Potro and then defeated Simone Bolelli on Friday, eventually triumphed in one hour and 41 minutes against world No. 90 Starace.

"I'm very happy to have won the point for Switzerland so that we can play in the World Group again," Federer told the Davis Cup Web site.

"I'm very happy with the quality of my game today, as I definitely didn't feel the best and had a problem on my leg, which has troubled me a bit since the final of the US Open."

In the semifinals, both of which were decided on Saturday, Spain and the Czech Republic completed 4-1 victories ahead of their meeting in the final in December.

Defending champions Spain, who will host the final, took a 4-0 lead against Israel when David Ferrer beat Andy Ram 6-3 6-1 in the first dead rubber, then Harel Levy scored a consolation victory for the visitors as he defeated Feliciano Lopez 7-5 6-2.

The Czechs also won their first dead rubber on Sunday to go 4-0 ahead against Croatia in Porec, with Jan Hajek beating Roko Karanusic 7-6 (7-4) 6-4.

Lovro Zovko reduced the deficit for the home side when he won 6-3 6-4 against Lukas Dlouhy as both captains took the chance to give fringe players a runout.

Sweden relegated Romania for the first time since 2002 as Robin Soderling beat Victor Hanescu 7-5 6-1 6-0 in Sunday's opening reverse singles match to make it 3-1.

French Open finalist Soderling, ranked 11th in the world, was too strong for the world No. 28 on his favorite indoor surface in Helsingborg as he registered his third victory of the tie, having defeated Victor Crivoi in straight sets on Friday and then teaming up with Robert Lindstedt to win the doubles.

"It feels fantastic. It was an incredibly important match that we just had to win. Losing just wasn't in the picture," Soderling told the official Davis Cup Web site.

In the second singles match,Yuki Bhambri was handed his debut and defeated Izak Van Der Merwe 3-6 6-3 6-4.

Belgium beat the Ukraine 3-2 with No. 2 player Steve Darcis winning the decisive match 6-2 6-1 6-0 against youngster Sergei Bubka, while Serbia completed a 5-0 rout of Uzbekistan.