(CNN) -- Alejandro Valverde clinched his first victory in one of cycling's major three-week races as he continued his dominant run at the Vuelta Espana on Sunday. 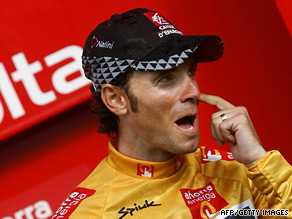 Alejandro Valverde proved his doubters wrong by winning, according to his team manager Eusebio Unzue.

The Spaniard maintained his 55-second lead ahead of compatriot Samuel Sanchez as he placed 26th in the closing 110-kilometer 21st stage from Rivas Vaciamadrid to Madrid.

Olympic road race champion Sanchez finished in the same pack, as did third-placed Australian Cadel Evans, as they were 10 seconds behind stage winner Andre Greipel.

The German won in a sprint finish from Italy's Daniele Bennati and Slovenia's Borut Bosic for his fourth stage victory of the race, but finished 107th overall for Team Columbia.

It represented a big moment for Valverde, who won the Tour of Catalonia earlier this year but was unable to race in the Tour De France for his Caisse d'Epargne team following allegations of drug use.

The 29-year-old denied the charges, but was in May banned for two years from racing in Italy by the Italian Olympic Committee which effectively ruled him out of cycling's premier event.

Valverde's best stage result in the Vuelta was second in the 19th stage, while he was third in ninth stage and fifth in the preceding one.

But his all-round strength saw him place second in the points standings for sprinters behind Greipel and fourth in the climbers' standings -- won by Frenchman David Moncoutie.

Caisse D'Epargne were second overall behind Xacobeo Galicia, whose best rider in the overall standings was fifth-placed Spaniard Ezequiel Mosquera.

"It was something we needed because a certain black cloud has been created around Alejandro and a lot of false impressions: that he always has a very bad day, he has lapses in concentration, he can't finish races well," Unzue told the race's official Web site.

"I think in this Vuelta he showed his maturity and progress and got all those monkeys off his back. He demonstrated he is perfectly capable of winning a three-week race."