LONDON, England (CNN) -- Bob Andrews lost his sight in the Vietnam War but the patriotic American is keen to serve his country again by helping to revive a Ryder Cup competition for blind golfers. 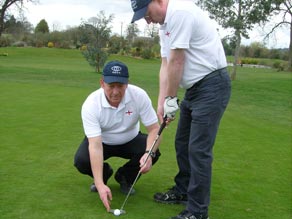 Former U.S. Marine Andrews was 22 when he was robbed of his vision in 1967 after a grenade explosion left him unable to see.

Andrews only occasionally played golf when he was younger. But when he lost his sight his interest in the sport really developed and he became involved in the development of the U.S. Blind Golf Association.

Andrews is excited by the possibility of a return of blind golf's version of the Ryder Cup, which was last contested in 1995.

And as a former president of the USBGA who now sits on the board of the International Blind Golf Association, Andrews is hopeful the tournament can be revived.

"I would love to see a Ryder Cup for blind golfers make a return. We had some great days back in the 1990s and played some great courses such as Wentworth," he said.

"The Ryder Cup itself is really popular and I think that matchplay in a team scenario is ideal for blind golf so bringing it back is something we should all work towards.

"Of course, there are different levels of blindness and provided that the criteria can be laid down -- which has caused some problems in the past -- then I think we could have a brilliant event on our hands."

Tony Shearman, of the English Blind Golf Association, agreed that there is interest in a Ryder Cup competition for blind golfers on his side of the Atlantic.

He added: "Blind golf is really growing and expanding as a sport in Europe and further afield. I think there is a real appetite among the top players here to get some sort of match up between the U.S. and Europe if at all possible.

"We also have some of the best players, including current world champion Mike Loten, so it would be a really good contest. If something can be sorted out that would be brilliant," he finished.

Blind or partially sighted golfers have a sighted coach who assists the golfer in describing distance, direction and characteristics of the hole, and helps with club head alignment behind the ball, prior to the stroke.

From this point, the golfer is on their own, and it is their skill that determines the resulting stroke. Other than the coach, there is only one relaxation to the Royal & Ancient Rules of Golf: Blind or partially sighted golfers are allowed to ground their club in a hazard.

Andrews, who lives in Florida, revealed that blind golfers use several techniques to aid them just before they make the shot.

"Some golfers like to visualize what the whole looks like and get as much information as possible from the sighted coach to try and paint a picture in their mind of what the layout of the hole might be," he told CNN.

"But I prefer to play the numbers game. What is the par for hole? What is the length of the hole? Once I know these things I can calculate the power needed for my shots and pretty much know how far I need to hit the ball and which club I need.

"Without doubt, putting is the most difficult -- I try to read the contour of the greens through my shoes to get a feel for how hard I have to hit the ball, whether there is a gradient et cetera," Andrews explained.

"A lot of the time, with advice from the coach, blind golfers can make it to the greens in more or less the same number of shots as sighted players," he said.

"Most of the golf I play is against players who have full vision. And let me tell you they don't cut me any slack whatsoever -- not a single stroke -- especially if the loser buys the beer!" he joked.

While the sighted coach is essential to the blind golfer, having an extra person can also bring a fresh set of problems.

"Sometimes having a coach can overcomplicate things for you with the amount of information and often when they leave stuff out it can actually help you," Andrews explained.

"For example, I would hit over a lake easier if I didn't know I was doing so -- but if I know it is there then all of a sudden it puts more pressure on you," he said.

"The other thing is that you are playing as part of a team," he continued. "You might be on fire and playing the best golf of your life but if the other part of that team is having a bad day it can mean you don't shoot the score you want."