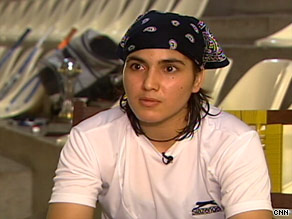 Now, she dispenses of anyone who takes her on within the walls of a squash court.

Pakay, 18, is Pakistan's No. 1-ranked women's squash player. But what makes her story remarkable is that she hails from the country's tribal region of South Waziristan.

The region, along the border with Afghanistan, is home to the Taliban.

There, suicide attacks are a way of life. And the militants, bent on imposing a strict form of Islamic law, punish girls who attend school -- let alone play sports.

"They have no future," Pakay said. "They spend their entire lives in four walls in their home. Their ability is destroyed."

But Pakay wasn't like most girls growing up. She sported a buzz cut and mixed with the boys.

"If someone argued with me, I used to beat them up," she said. "I wanted them to obey me all the time."

Her father, Shams-ul-Qayum Wazir, knew early on that his daughter was different.

"I didn't want her talent to go to waste," he said. "If I would've kept her in the village, all she could do was housekeeping."

So, Wazir packed up the family and moved to Peshawar, the capital of the North West Frontier Province.

In squash, players take turns hitting a ball to the front wall of a court, until one misses.

Pakay, it turned out, rarely did.

"I thought nobody could beat me," she said. "From the beginning when I played squash, I thought I could be a world champion."

Today, despite the lack of a sponsor and few resources, Pakay has gone pro -- and is ranked 91st in the world.

Her father's sacrifice, she said, made her success possible.

"I think I have a great father -- so broad-minded," she said.

For his part, Wazir -- a teacher -- was more circumspect.

"I sacrificed because I want to promote a message of peace," he said. "If the tribal people pick up a racquet instead of a gun, there would be peace."

All About The Taliban • Pakistan • Afghanistan