(CNN) -- In these eco-conscious times, there are few areas of life that have not been touched by the drive to go green, and golf is no exception. 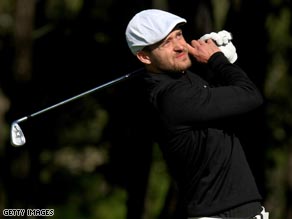 Justin Timberlake has been an advocate of eco-golf at his course in Tennessee.

The trend for environmentally friendly golf is rocketing with celebrities such as Justin Timberlake taking up the cause in unveiling one of the world's top eco-golf courses earlier this year.

His club, the Mirimichi Golf Course in Tennessee is the first in the country to be designated as a certified Audubon International Classic Sanctuary, re-using 80 percent of the energy it produces.

Next month Stockholm will host one of the largest meetings of American and European golf clubs to decide how the game can become more environmentally and socially responsible.

Living Golf looks at a selection of some of the best eco-equipment making our greens even greener.

Every club player will be familiar with the age-old problem of losing golf balls -- but what happens to the collection of wayward balls once the search is over? 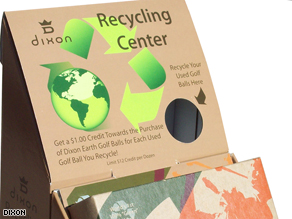 Dixon Golf are asking for their customers to recycle their balls.

It is estimated 300 million golf balls are discarded in the United States alone, every year -- that is enough balls to create a solid line from Los Angeles to London and back.

Dixon Golf are encouraging golfers to recycle their lost and found by offering a dollar for each ball that is returned to their recycling centers throughout the US and in over 15 countries worldwide.

"We're getting the word out there. We don't have the advertising revenue of [bigger] companies but the more people know, the more they chose our eco-friendly balls. 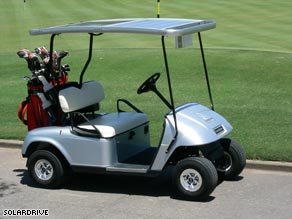 The SolarDrive sun-powered car - an energy solution for the future?

By recharging itself throughout the day, the cart can work in drizzly and damp conditions -- which could be good news for golf lovers in rain-soaked Britain and sun-baked Abu Dhabi alike.

The design has proved so popular that golf clubs such as the Jockey Club Kau Sai Chau Course in Hong Kong and Sebonack Golf Club in the U.S. have converted entire fleets to use the power of the sun.

General Manager at Sebonack Mark Hissey says it has been a great move for the club: "They look fantastic. Plus they're financially better for us to run, saving us over two-thirds on our electrical costs," -- large-scale gated communities in the UEA are also reportedly keen to use the carts as a more environmentally-friendly alternatives to gas-run vehicles.

A littered tee box may be a thing of the past with the biodegradable golf tee. Manufacturers XT-1 believe they are saving over 100, 000 trees with their nifty corn based tee. 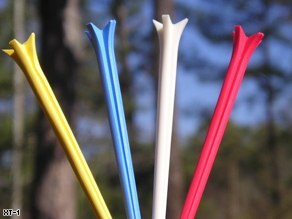 The manufacturers of the XT-1 claim it will biodegrade within three months.

Unlike wooden tees which take up to two years to degrade, XT-1s take just two to three months by way of an interesting eco-system.

Once the tee comes in contact with the soil, the corn-based product is attacked by incredibly small microbes (or micro-bugs) that eat away at the tee to corrode the core.

A slightly unusual method perhaps but an effective one, as sales in the last few years have soared.

Manager Alan Berry told CNN: "We're gaining interest all over the world -- Australia, the Middle-East, Europe and the States. Our sales figures speak for themselves."