(CNN) -- Ukrainian Vitali Klitschko -- who shares three of the four major heavyweight titles with brother Wladimir -- will put his World Boxing Council (WBC) belt on the line when he meets Cristobal Arreola at the Staples Center, Los Angeles on Saturday. 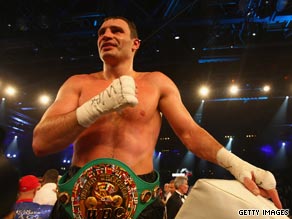 Klitschko will be putting his WBC belt on the line when he faces Cristobal Arreola on Saturday.

The 38-year-old Klitschko -- who has not lost since a 2003 defeat to Lennox Lewis at the same arena -- told reporters: "This will be fight number three at Staples.

"For me it is the biggest arena and I am ready to fight there. I will show my skills and punch in the ring. I spend a lot of time in Los Angeles and am looking forward to the fight."

Klitschko has won 37 of his 39 fights, with all but one coming inside the distance. Apart from the defeat to Briton Lewis, which was stopped because of a heavy cut over his eye, his only other defeat was to Chris Byrd in 2000 -- when a shoulder injury preventing him from continuing.

Arreola, who is unbeaten in 27 fights, including 24 KOs, is trying to become the first fighter of Mexican descent to win a heavyweight title.

The 28-year-old has added 12lbs to his weight since beating Chris Witherspoon 15 months ago and is confident of victory.

"I am going to bring emotion and determination to win the title for Mexicans and Mexican-Americans to celebrate. That is my goal."