LONDON, England (CNN) -- Drinking alcohol out on the seas has long been a tradition among mariners. 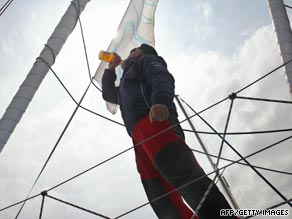 Sailors are notorious for celebrating with alcohol on board their ships.

Now a legal proposal for recreational boaters in England threatens to end that laissez-faire life on the water, with new regulations that include breathalyzers and alcohol policies similar to the ones faced by drivers on the road.

While a broad consensus exists that drunken boat driving should be banned, the details of the new law have stirred a political controversy with some accusing the government of overreach and incompetence.

"The proposal is unworkable" said Howard Pridding, Executive Director of the British Marine Federation. "We are concerned about badly framed legislation damaging the boating market," he told CNN. Should sailors be subject to the same drinking laws as drivers? Tell us below in the SoundOff box

The argument now is over where the lines for the exceptions should be drawn, and if they should be at all.

"The limited exemption at seven meters and seven knots is designed to provide the best balance between improving safety and avoiding unnecessary regulation," a spokesperson for the department told CNN in a statement.

Many sailors and legal experts disagree though. "The bill needs a complete rethink," said Barnaby Wright, a lawyer at Hill Dickinson. Wright, who recently chaired a seminar at the Southampton Boat Show called "What Shall We Do with the Drunken Sailor?" told CNN that the exceptions should be pushed through into law, but that the parameters need revision.

"The measure is for boats under seven knots maximum speed by design; it should be by horsepower, because nobody knows what the design speed is," he said.

Guy Lewis of the Royal Yachting Association told CNN that "no limits" should be set and that current laws which criminalize drunken boating under the Merchant Shipping Act are sufficient.

"The alcohol limits [in the bill] were developed to be relevant for people driving 70mph on a motorway, not for someone rowing their dinghy ashore ... No thought has been applied by the government as to whether or not that this is the right way of tackling the problem.

"We don't think there should be limits at all. It is much more important to have a general sense that if you're endangering the lives of others you are committing an offence, if you have been drinking that should aggravate the offence."

Both Lewis and Pridding also challenged the idea that the government currently had the resources to enforce the proposed legislation. Since English law states that only a uniformed policeman can administer a Breathalyzer test, effective monitoring could be a serious challenge.

"Who will actually enforce this legislation? Who will be responsible for policing it?" Pridding questioned. "If someone's out at sea who would apprehend them? ...There aren't police out there on the water ...They are going to have to give power to detain someone till a policeman arrives and there are big civil liberties problems with that."

Pridding also questioned the data which the government consultation refers to, saying it used information from both Canadian and Australian drug use reports from the 1990s.

"I don't think there's a widespread problem and there's no evidence of widespread problem," he said referring to drinking and boating accidents. "We are concerned that the national legislature will be smashing a nut with a sledgehammer, when it is only a small minority who create problems.

Discover incredible superyachts and get your sailing fix!

The Department of Transport defended its figures in a statement saying: "Figures from the Marine Accident Investigation Branch (MAIB) show that alcohol was found likely to have played a role in more than quarter of leisure craft deaths reported to them from 2005 to 2007.

In total 113 deaths were reported and of those alcohol played a role in 30."

The alcohol limit being introduced for recreational mariners is the same as the drink-drive limit: 80 milligrams per 100 milliliters of blood and will apply to those persons involved in the navigation of a vessel.