(CNN) -- Vitali Klitschko retained his WBC heavyweight title at the Staples Centre in Los Angeles with a convincing 10th round stoppage victory over Mexican-American Cristobal Arreola. 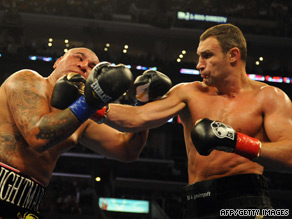 Klitschko (right) lands a powerful right-hand on his way to victory over Cristobal Arreola in Los Angeles.

The Ukrainian, in his third fight since coming out of a four-year retirement almost 12 months ago, chalked up the 37th stoppage of his professional career and took his record to 38-2 after outclassing Arreola -- using his height and reach advantage to great effect to end his opponent's 27-fight unbeaten run.

Klitschko, 38, was fighting in the United States for the first time since defeating Danny Williams in 2004 and in the same arena in which he was stopped by Lennox Lewis due to a cut in 2003.

The 6ft 7in Klitschko was the better man throughout, dictating the pace of the fight and slowing Arreola's busy workrate by keeping the American at arm's length.

Arreola kept the champion busy with his go forward style but took a lot of punches in the process and his face was visibly reddened as he emerged for the fourth round.

The fourth was much the best for the American as he managed to catch Klitschko with a couple of wild swings and also a short left hook as he managed to raise the volume from his hometown fans.

Arreola was still taking more punches than he was landing though, and Klitschko was happy to stage smash and grab raids as the challenger chased the champion around the ring.

Klitschko was dominating the fight, hurting Arreola with his left jab, sporadically throwing a straight right to follow up but it was not stopping the American, who burst into life in the eighth round.

At last his pressure began to earn rewards as he had Klitschko back-pedalling under flurries of punches but again there was a price to pay as blood began to flow from his nostrils after walking onto another jab.

Arreola had not been past the eighth round in his career before, his three non-knockout victories coming with a decision after six rounds and two disqualifications.

Whether that was a factor or not, Klitschko began to take his rival apart in the ninth as he was rocked with two rights, a short upper cut and a straight right from the champion.

The 10th saw more of the same and as Arreola returned to his stool his corner decided enough was enough and referee Jon Schorle waved the fight off, reducing the beaten man to tears in the process.

"I know he was hurt," Klitschko told reporters. "I hit him a lot. He has a great, great chin. I landed a couple of very hard punches to his head, but he still stayed on his feet."