COPENHAGEN, Denmark (CNN) -- U.S. President Barack Obama urged the International Olympic Committee on Friday to pick his hometown of Chicago as the host of the 2016 Games, saying the city represents the American dream as well as the Olympic spirit. 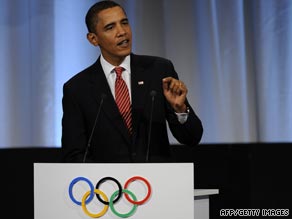 Obama's address to the 106 IOC members gathered in Copenhagen, Denmark, was the highlight of the Chicago bid committee's final presentation before the vote to choose the host city.

He pointed out that from hosting the World's Fair in 1893 to hosting World Cup events in 1994, the city has the experience needed to put on an Olympic Games.

"We know how to put on big events and scores of visitors and spectators will tell you we do it well," the president said.

Obama took the podium just after his wife Michelle made a heartfelt plea for IOC members to award the Games to her native city. She emphasized the city's community spirit and desire to meet challenges.

"Chicago's vision for the Olympic and Paralympic movement is about so much more than what we can offer the Games," she said. "It's about what the Games can offer all of us. It's about inspiring this generation and building a lasting legacy for the next. It's about our responsibility as Americans not just to put on great Games, but to use these Games as a vehicle to bring us together, to usher in a new era of international engagement, and to give us hope and to change lives all over the world."

Chicago was the first of four potential host cities to appear before the IOC on Friday. After more than a year of intense campaigning, each city is making a last-minute effort to attract more votes in their favor.

Obama said Chicago is a place where people know that no matter their background, "with hard work and discipline and dedication, we can make it if we try."

During the question and answer session that followed Chicago's presentation, Syed Shahid Ali, an IOC member from Pakistan, asked the Chicago representatives about the difficult entry requirements for many foreign visitors to the United States.

Chicago 2016 President Lori Healey said the committee has a strong partnership with the federal government that includes the formation in June of a special federal office for the Olympics that would oversee the entry of international visitors.

President Obama added that the issue is an overall priority, not just for the Games.

"One of the legacies I want to see coming out of the Chicago 2016 hosting of the Games is a reminder that America at its best is open to the world," he said. "We are putting the full force of the White House and the State Department to make sure that not only is this a successful Games, but that visitors from around the world feel welcome and will come away with a sense of the incredible diversity of the American people."

Friday evening, after the presentations, IOC members will sit down to cast their votes in a secret ballot. Ninety-seven of the IOC's 106 members are eligible to vote in the first round; seven must sit out that round because they represent one of the countries bidding for the Games. One other member is currently suspended, and IOC President Jacques Rogge has chosen not to vote.

A city must receive a majority of votes in order to win. If no city receives a majority, voting moves on to a second round, with the city receiving the lowest number of votes being eliminated, an IOC spokeswoman said.

Experts say all four cities are strong contenders, though Chicago may have an edge.

"It's difficult to say who the frontrunner is, but we feel that Chicago and Rio are neck and neck," said Ed Hula, editor of the Olympics Web site Around the Rings. "The influence of President Barack Obama coming to Copenhagen is considered something that could put Chicago ahead. It certainly has given them a lot more attention and a lot more sway."

Other cities also have their country's leaders attending the meeting to support their bids.

Spain's King Juan Carlos and Queen Sofia and Spanish President Jose Luis Rodriguez Zapatero are planning to push the case for Madrid, according to the Madrid 2016 bid committee.

Brazilian President Luiz Inacio Lula da Silva was expected to be joined by soccer legend and Brazilian native Pele as they advertise the benefits of a Rio Games.

And Japanese Prime Minister Yukio Hatoyama, just two weeks into the job, also planned to be at the vote to demonstrate the government's full backing of the Tokyo bid, the bid committee said.

"It's not a requirement for heads of state to come to our session," said the IOC spokeswoman, who asked not to be named. "We are obviously very honored if they decide to come, but there's no particular requirement."