Pakistan accused of cricket match-fixing by own government

(CNN) -- Pakistan cricket is embroiled in a new controversy after the national team were accused of deliberately losing two games at the Champions Trophy by a government official. 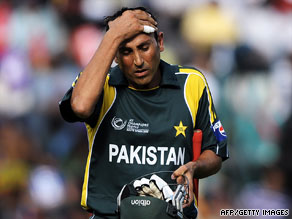 Younis Khan's future as Pakistan captain is in doubt following accusations of match-fixing.

The chairman of the National Assembly's standing committee on sports claimed in a television interview that Pakistan lost to Australia to knock traditional rivals India out of the limited-overs tournament in South Africa.

Australia won by two wickets by running a bye on the final ball of the closing Group A tie on September 30, which ensured they reached the semifinals and ended India's hopes.

Captain Younis Khan then dropped a simple catch as his side lost to New Zealand by five wickets in Saturday's semifinal.

"We went with a pre-determined mind to lose the match against Australia," Jamshed Ahmed Dasti told Pakistan TV channel Geo TV on Tuesday.

"Our intention was to keep India out. It was a deliberate decision to lose the match against India."

Dasti said that the team also intentionally lost the match to New Zealand, who were beaten in Monday's final by defending champions Australia.

"That's why the NA Standing Committee on Sports has called in captain Younis Khan, coach Intikhab Alam and [Pakistan Cricket Board] chairman Ijaz Butt for investigations," he said.

One report in Pakistan claimed that Younis and Intikhab had already been sacked by the PCB, but others said that Pakistan cricket's ruling body was happy with the team's performance.

"The team played well and tried hard. It is unfortunate they couldn't qualify for the final, which every player wanted to do, but they had one bad day against New Zealand," PCB spokesman Nadeem Sarwar told the Express Cricket Web site.

"As far as we are concerned, the team did well in the Champions Trophy and their performance was satisfactory."

Former captain Rashid Latif criticized Dasti for making serious allegations without backing them up with proof.

"I was one of those who first raised the issue of match fixing in international cricket, so I know what I am talking about. I can say the team did its best and played hard in the tournament -- a few mistakes cost them a place in the final," Latif told Express Cricket.

"I think parliamentarians should first look at the corruption in the government before talking about cricket. It is unfortunate that when the team needs backing, a parliamentarian should make such allegations."

The accusations are another blow for Pakistan's cricketing fortunes.

The sub-continent nation lost the rights to host the Champions Trophy due to security issues -- it was postponed last year and switched to South Africa -- and was then ruled out of staging the 2011 World Cup.

Akhtar, once Pakistan's most feared weapon, has constantly clashed with the PCB, which banned him for hitting a teammate with a bat in 2007 and threatened him with court action following a public feud which ended with a five-year suspension that he successfully appealed.

The PCB also punished him for testing positive for the performance-enhancing drug nandrolone in 2006, while fellow fast bowler Mohammad Asif was arrested in Dubai for possession of illegal drugs last year.