(CNN) -- When Barack Obama was elected U.S. president he probably did not realize it would give him a chance to pick up tips on his backswing from the world's elite golfers. 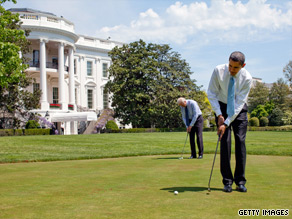 Obama is the honorary chairman for the 2009 Presidents Cup which will be contested at Harding Park Golf Course in San Francisco this week where the top U.S. golfers take on the best players from around the world outside of Europe.

As a golf enthusiast, and keen amateur player, the president will get the chance to pick the brains of Tiger Woods, Phil Mickelson, Ernie Els and Vijay Singh on how to improve his game.

But he is not the first to take to the greens while occupying the Oval Office with 15 of the last 18 U.S. presidents said to have played the sport while in power.

Dwight Eisenhower is recognized as probably the most dedicated to the sport, and was often criticized by Democrats for spending too much time on the golf course.

Eisenhower's solution? In 1954 he had a putting green installed at the White House a short stroll from the Oval Office to enable him to practice while at work which was regularly used by subsequent presidents and still exists to this day.

The former five-star general was also a member at the Augusta National Golf Club where a overhanging tree on the 17th hole proved such an obstacle to the leader that it was dubbed the "Eisenhower Tree."

There is little doubt though that John F. Kennedy was the most talented presidential golfer, although he was reluctant to associate with the game.

During his run for president in 1960, Kennedy did everything possible to keep his fellow Americans from discovering that he not only loved the game but was nearly as good as a club professional and was said to have had a beautiful natural swing.

Throughout Eisenhower's two terms Kennedy had portrayed him as someone who cared more about lowering his handicap than improving the lives of ordinary Americans, so information about his passion for the links only really came out later.

Lyndon Johnson is at the opposite end of the spectrum on the talent stakes and is reported to have taken up to 400 swings to get round an 18-hole course while Gerald Ford, who served as honorary chairman for the inaugural Presidents Cup in 1994, had a reputation for accidentally hitting the ball at spectators.

In terms of sheer number of matches though even Eisenhower could not match Woodrow Wilson who was said to have played almost every day, apart from on Sundays, and even had golf balls painted red so he could play in the snow.

Ronald Reagan was only an occasional player but Bill Clinton was renowned for an entourage featuring Secret Service agents, a police sniper, a man carrying U.S. nuclear codes, various aides and someone with a secure telephone so he could speak to world leaders on a typical round.

George W. Bush still plays regularly with his father, and fellow former president, but Bush junior's contribution to golf will forever be immortalized in a short press briefing he gave from the course after being questioned on violence in the Middle East.

"I call upon all nations to do everything they can to stop these terrorist killers. Thank you." Bush said before he paused and told reporters: "Now watch this drive!"

Obama therefore follows a healthy tradition of golfing presidents and he can relax safe in the knowledge that even if he cannot solve the world's problems while in the White House at least he can improve his short game.