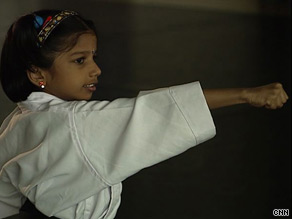 To gain her black belt, Varsha had to learn up to 15 karate moves.

When we meet for our interview, her hair is tied up in two pigtails, with bright hair clips and a glittering headband. She is as shy as most kids her age would be when confronted by a strange man and a television crew.

Some child stars can be precocious but Varsha doesn't act like one. In fact, it would have been impossible to imagine her as a karate black belt if it wasn't for her white martial arts outfit and her actual black belt.

Like many young girls she would love to be a dancer and she smiles when I tell her that we are doing the interview in a dance studio. It's got varnished wooden floors and ceiling-high mirrors. The venue was chosen because it looks a bit like a dojo, or martial arts school.

I'm not sure Varsha understands what a dance studio is and it's hard to discover her thoughts on many things. She only speaks a few words of English and, even when we use an interpreter, she has to be prompted by her father before whispering short, quiet responses to my questions.

At first I was concerned her dad was feeding her the answers rather than helping her say what she really thinks. However, it soon becomes clear that this is a healthy father-daughter relationship instead of a case of "pushy parents."

Vishwas Vinod can be stern with his daughter but she clearly worships him, hanging on his every word and happy to follow his instructions. When the pair practice karate together their movements are surprisingly well synchronized despite the huge difference in size.

Varsha's father is her inspiration. He was India's karate champion for four successive years from 1999 to 2002. His daughter started watching him teach the sport and, at the age of 2, she asked to try. Vinod insists it was Varsha's idea not his.

Initially, he only gave her some small training and stretching exercises but Dad soon realized that his daughter possessed what he describes as a God-given talent. Vinod says what Varsha has done in 3½ years takes most people eight years to learn.

To gain her black belt, Varsha had to learn up to 15 katas. A kata is a sequence of complicated karate moves. Varsha can punch, kick and wield different weapons: the Chinese stick, which is almost as big as she is, and a nunchaku, two short sticks connected by a metal chain.

There is no doubt that Varsha's abilities are impressive. You only have to enter the phrase "nunchaku accidents" into YouTube to see how easily things can go wrong. However, she is no freak of nature. Her karate is a feat of memory and technique more than agility and power. To be frank, she couldn't beat me up -- although I was obviously far too proud to find out by taking her on in a sparring session.

Varsha trains for at least two hours every day but says she still has time for other games. As well as her dancing, she likes to play football and badminton. She tells me that her friends have all started taking up karate after seeing how good she has become.

Unlike her friends, Varsha's gift has given her the chance to see London. She was invited to England by a PR company to promote a new video game. Her trip appears to have been handled carefully, with as much time set aside for sightseeing as media work.

The day after we filmed with Varsha she was due to go on the London Eye and was very excited about it. Varsha says she would like to continue her karate in the years ahead.

She is a black belt first dan, or grade, and there are 10 grades in total. She is already a mini master but if she makes it to second dan she can start teaching -- just like her father.