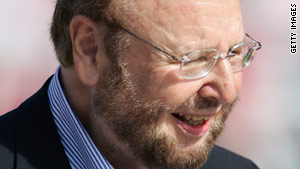 Malcolm Glazer is the man to lead Manchester United to success according to Roy Cummings of the Tampa Tribune.
STORY HIGHLIGHTS

London, England (CNN) -- Fans of the Tampa Bay Buccaneers may have felt disappointed with their sides' 35-7 National Football League (NFL) loss to the New England Patriots at Wembley Stadium in London this week, but from the wreckage of defeat there was optimism to be found, for Bucs' fans and, bizarrely, those of Manchester United too.

Roy Cummings has been the Bucs' beat writer for the Tampa Tribune for the last eleven years and he told CNN there was ne good reason why the future could be bright for both franchises -- and that reason is Malcolm Glazer.

This may seem a strange statement for many sport fans in Britain, who know Glazer better for saddling United with $1 billion of debt in an era of financial uncertainty, but Cummings feels the 81-year-old's leadership will ultimately prove as successful for the soccer franchise as it has been for that of the NFL.

Glazer bought the Tampa Bay-based side in 1995 and, over the following years, reshaped a team used to disappointment into a title-winning side. Look inside Wembley's hosting of the NFL

"The team was a mess, the coach wasn't working out and the players were poorly managed," Cummings said.

"There was a lack of real leadership, so when they Glazers came in they took a chance in a couple of areas and that really paid off.

"They gambled on a coach called Tony Dungy, who had never been a senior coach before, and they then leaned on their football people to make the key decisions."

The move paid off, with Dungy laying the foundations for a side who, under the new regime of Jon Gruden, triumphed by winning a maiden Superbowl title in 2002.

This success was a result of a good decision-making model being in place within the Buccaneers structure as well an appetite for investment.

"The previous owner were cheap, no two ways about it, but the Glazers would spend nothing other than top-dollar on coaches and players to get the team to where they wanted it to be," Cummings added.

"They provide the assets needed for a championship winning side, they know that is their job, not being out front and waving the flags. They don't mind taking the heat when things don't go well because at the end of the day, in my experience, things normally work out the way they want them too."

A sentiment both Bucs' and Manchester United fans will hope will come true.