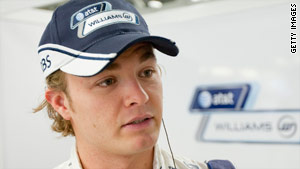 (CNN) -- German driver Nico Rosberg has revealed that he is looking for a new Formula One team for next season, and that this weekend's race in Abu Dhabi will be his last for Williams.

The 24-year-old is widely expected to join world champions Brawn as new teammate for Jenson Button, who wrapped up the drivers' title at the Brazilian Grand Prix two weeks ago.

Veteran Brazilian Rubens Barrichello has been tipped to replace him at Williams, which is also based in Britain.

"This is my last race for Williams," Rosberg told reporters. "It's a bit strange because for four years it has been the only team I've worked with, so it's been a long time.

"I get on really well with everybody, a lot of respect has built up with all the mechanics, so it is going to be quite strange to leave.

"I can only use the opportunity to really thank the team, because it has been very good for my career. Sir Frank, Adam Parr, Sam Michael and Patrick Head have really supported my career all these years, so quite a big thank you to them."

Rosberg, who has been tipped to follow in the footsteps of his 1982 world champion father Keke since winning the inaugural GP2 series in 2005, has performed well at Williams despite the team's lack of speed on the track.

He has earned one podium finish and scored almost three-quarters of Williams' points over the past four seasons, lying seventh in the overall standings this year.

For four years it has been the only team I've worked with, so it's been a long time.
--Nico Rosberg

His teammate Kazuki Nakajima, by comparison, languishes in 19th place with no points.

While Rosberg indicated his desire to join a more competitive team, he refused to name any names.

"I don't want to talk about my future. I just want to say I won't be with Williams, because that's sure," he said.