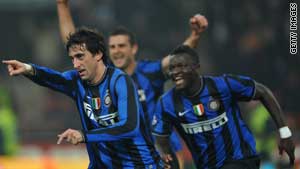 (CNN) -- Inter Milan moved four points clear at the top of Serie A after beating Palermo 5-3 in a thriller on Thursday night.

Two goals each from Samuel Eto'o and Mario Balotelli before half-time looked to have wrapped it up before the interval, before a second half fightback from Palermo put Inter on the back foot.

Fabrizio Miccoli grabbed two either side of Mathias Hernandez's 62nd minute strike as the Sicilian outfit looked to stage an amazing comeback.

However, Diego Milito added a fifth for Inter in the 83rd minute to calm the home side's nerves.

Inter went ahead after seven minutes, Balotelli earning a penalty when he was brought down under pressure from three defenders.

Eto'o converted, although teenager Balotelli had to be persuaded by captain Javier Zanetti to let his more-experienced strike partner take the spot-kick.

After going close from an Esteban Cambiasso cross, Balotelli found the net himself with 34 minutes gone when he headed Maicon's corner in at the near post.

The Italy Under-21 striker grabbed a second just before half-time when Cambiasso took advantage of sloppy Palermo defending to leave him with a tap-in before 60 seconds later Eto'o grabbed his second beating Salvatore Sirigu at his near post.

Palermo came out after the interval transformed and only four minutes in Miccoli pulled one back before substitue Hernandez added a second.

Miccoli beat the offside trap to cut the deficit to one but Milito settled Inter's nerves when he converted from another Maicon assist.

The victory sees the Nerazzurri extend the gap once more over their nearest rivals Juventus, the Turin side having pulled closer the previous evening beating Sampdoria 5-1.