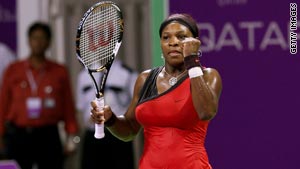 (CNN) -- Serena Williams claimed a fourth successive win over older sister Venus to triumph in straight sets in the final of the season-ending Sony Ericsson WTA Championship in Doha on Sunday.

Serena, who is guaranteed to end the season as world number one, completed her fifth straight win in this week's prestigious end-of-season tournament, easing to a 6-2 7-6 victory.

She wasted little time taking the first set but had to dig deeper in the second before winning the tie-break to go 13-10 up on defending champion Venus in professional meetings between the American siblings.

Venus had a battle on her hands to make the final, coming from a set down to sneak past Jelena Jankovic on Saturday - while Serena had a much easier time, thanks to Caroline Wozniacki's mid-match retirement because of a leg injury.

Serena blasted a succession of service returns and rarely needed to get out of a canter -- with long rallies a rare occurrence -- as she closed out the first set with ease.

She had an early break and comfortably built on that advantage thanks to some typically crunching serves when she needed them -- despite appearing in pain with a troublesome injury that required significant strapping on her left leg.

Venus, by contrast, rarely appeared capable of testing her sister and lost the final game of the first set to love -- on Serena's serve.

Although Venus held serve throughout the second set, it was not until 40-0 down in the sixth game that she won her first point against serve since midway through the first.

Serena continued to hold her serve with ease but Venus' persistence meant the break proved elusive until the balance of power was accurately reflected in a tie-break that saw Serena end the match with a rasping cross-court winner.

Serena insisted afterwards her near faultless campaign had far exceeded her expectations as she collected a second Tour Championships title, eight years after her first success.

"I didn't expect to come here and win," she told British Eurosport. "My practice was not going very well at home -- but I kept fighting.

"Playing Venus in the final was really tough. Even though she was not feeling all that great, she was getting every ball back -- and it was really frustrating."