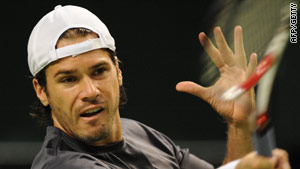 Haas was forced to pull out of last week's tournament in Stockholm feeling unwell.
STORY HIGHLIGHTS

(CNN) -- German tennis star Tommy Haas has been gone down with swine flu and is set to miss key end of season tournaments.

The 31-year-old pulled out of last week's event in Stockholm, feeling unwell with flu-like symptoms.

"I did a test because I suspected that I had swine flu. The test was positive," Haas was quoted on the Web site of the Bild newspaper.

Haas is hoping to recover quickly to resume a season which has seen him rediscover his top form, reaching the semifinals at Wimbledon and winning his 12th ATP Tour title on the grass of Halle.

"When you are someone who is as physically fit a I am you can quite easily get over this flu," he said.

But he has been forced to withdraw from this week's big indoor tournament in Basel, which is headed by world number one Roger Federer.

Haas could also miss the Paris indoor event as he bids to improve his world ranking of 17.

Federer, who has had a six-week break, made a winning return on Monday night in his quest for a fourth straight title in his home city.

Of course, it was a shock for me
--Tommy Haas

Federer had not played since helping Switzerland defeat Italy in the Davis Cup Wordl Group playoffs on September 20.