Verdasco through but Tsonga crashes out 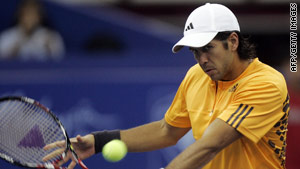 Fernando Verdasco remains on course for the World Tour Finals after going through in Valencia.
STORY HIGHLIGHTS

(CNN) -- There were mixed fortunes for World Tour Finals contenders Fernando Verdasco and Jo-Wilfried Tsonga at the Valencia Open on Wednesday.

Verdasco is currently occupying the last of the eight qualifying places for the prestigious end-of-season tournament in London later this month, which features the top players from 2009.

And the Spaniard had an easy time of things in his first-round match against Oscar Hernandez, losing only two games before his opponent retired with Verdasco leading 6-1 0-1.

But it was a different story for Frenchman Tsonga, who now faces a race to be fit for next week's Paris Masters -- the final points-scoring event -- after retiring in the third set of his match against Mikhail Youzhny with a left wrist injury.

Things began well enough for the third seed when he took the first set on a tie-break but he did not win another game and called it a day with Youzhny leading 6-7 6-0 3-0.

Gilles Simon, who is an outside bet to appear in London, kept his faint hopes alive with a hard-fought 6-4 4-6 6-3 victory over Tomas Berdych to become the first man to reach the quarterfinals.

However, sixth seed Gael Monfils was a second-round casualty, with the Frenchman going down 6-2 7-5 to Guillermo Garcia-Lopez.