Djokovic serves up a 'double bagel' in Basle 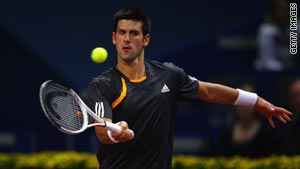 (CNN) -- World No. 3 Novak Djokovic whitewashed Jan Hernych 6-0 6-0 to reach the quarterfinals of the Davidoff Swiss Indoors tournament in Basle on Thursday.

The Serbian recorded the fifth "double bagel" of the 2009 ATP World Tour season, and the first in Basle since 1977, to reach the last eight for the 18th time this year.

The second seed needed just 52 minutes to beat the Czech world No. 59, and will next face home hope Stanislas Wawrinka after the sixth seed beat Jarkko Nieminen of Finland 7-5 2-6 6-1.

He is on course for a final showdown with top seed and three-time defending champion Roger Federer, who will play Evgeny Korolev in the quarterfinals.

Richard Gasquet came from behind to defeat unseeded American John Isner 4-6 7-6 (11-9) 6-2 and the Frenchman will next play Marco Chiudinelli, who won an all-Swiss clash with Michael Lammer 2-6 6-3 6-3.

Meanwhile, world No. 4 Andy Murray continued his comeback from a wrist injury at the Valencia Open with a battling victory in his second-round clash with Argentina's Leonardo Mayer.

The British player, who had been out for six weeks, produced an inconsistent performance, but survived to earn a quarterfinal clash with Alberto Montanes.

The Spaniard progressed when his compatriot, defending champion David Ferrer, pulled out with a hamstring injury which will end his hopes of qualifying for the season-ending ATP World Tour finals.

Second seed Nikolay Davydenko progressed into the quarterfinals with a 6-3 7-5 win against another Argentinian, Juan Monaco.

The Russian overcame a second-set stutter in which he served four double-faults to set up a clash with Guillermo Garcia-Lopez.

Davydenko and Verdasco are strong contenders to claim one of the remaining two places at the season-ending event in London later this month, while Robredo has an outside chance of qualifying.