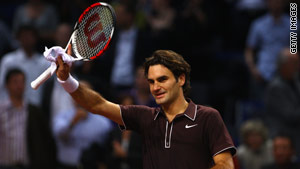 Top seed Roger Federer salutes the crowd after easing through to the semifinals in Basel.
STORY HIGHLIGHTS
RELATED TOPICS

(CNN) -- Roger Federer and Novak Djokovic are both through to the semifinals of the Swiss Indoor event in Basel, although they reached the last four in contrasting ways.

Federer will now face childhood friend Marco Chiudinelli for a place in Sunday's final after the world No.73 crushed Frenchman Richard Gasquet 6-1 6-3.

"It's so rare that I play a good friend like this," Federer told reporters. "It should be a great experience. Marco has really been improving this year. It will be tough but enjoyable."

Meanwhile, Djokovic stayed on top of the ATP win list with his 69th victory of a draining campaign, but he was far from his best in edging past another Swiss, Stanislas Wawrinka.

The Serb eventually went through 3-6 7-6 6-2 after trailing the sixth seed by a set and a break.

"A proper off-season should be a month-and-a-half or so," Djokovic said of a break which will amount to a month for those elite players participating in the eight-man Wold Tour Finals in London from November 22.

Djokovic will now face Radek Stepanek who dimmed the qualifying hopes of Croatian Marin Cilic for a last-gasp spot in the season-ending tournament with a 4-6 6-3 6-3 upset.

Croatian Cilic stands provisional 12th in the points race as he fights for one of a pair of slots remaining open in London.