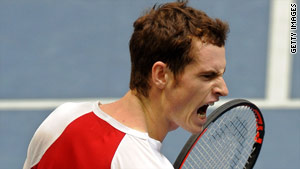 (CNN) -- Top seed Andy Murray remains on course for his sixth title of the season after beating Spain's Albert Montanes 6-4 6-2 to reach the Valencia Open semifinals.

Murray, the world number four, had struggled for two hours and 22 minutes against Argentina's Leonardo Mayer on Thursday -- but he was in complete control in Friday's quarterfinal, sealing victory in just 73 minutes.

The 22-year-old Briton is one of three players this season to have won at least 60 matches and, together with Rafael Nadal, leads the ATP World Tour with five titles in 2009.

Meanwhile, Gilles Simon's hopes of qualifying for the season-ending ATP World Tour Finals in London are over after the fifth seed was defeated 6-4 6-4 by in-form Russian Mikhail Youzhny.

The Frenchman was more than 900 points behind the eighth-placed Fernando Verdasco and needed to at least to match the Spaniard's result this week to keep his hopes alive.

Youzhny next faces compatriot and second seed Nikolay Davydenko, also a strong contender to clinch one of the final two berths in London, after he beat Spaniard Guillermo Garcia-Lopez 6-4 7-6.