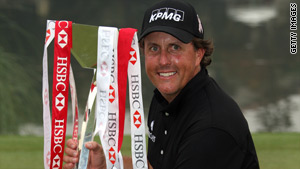 Phil Mickelson was beaming with delight after his win in the European Tour event in China.
STORY HIGHLIGHTS
RELATED TOPICS

(CNN) -- World No. 2 Phil Mickelson held his nerve at the final hole to end a difficult year on a high with a one-shot victory at the HSBC Champions tournament in Shanghai.

The American birdied at 18 despite twice finding the rough to edge out South African veteran Ernie Els, who charged into the clubhouse lead with a course-record-equaling nine-under-par 63 even though he bogeyed his final hole.

World No. 1 Tigers Woods finished tied for sixth after a disappointing 72 in the European Tour event in China, while world No. 4 Paul Casey pulled out after only two holes of his final round due to a recurrence of his rib problem.

The left-handed Mickelson carded 69 to finish on 17-under for the four rounds and win his second World Golf Championships event, following up his title at the CA Championship in Florida in March.

He also won the U.S. PGA's premier non-major event, the Tour Championship in September, but they were the few highlights in a year in which his wife and mother were diagnosed with breast cancer.

"It feels terrific because I had to fight so hard throughout the day," Mickelson said. "I didn't hit it great, the putts weren't falling, but I was able to hang in there.

"I am excited about 2010 because I am starting to play the best golf of my career. Everything is starting to come together as far as my driving goes, since working with Butch Harmon, my ball striking has been much better and my short game is as good as it's ever been.

Els was the third player of the day to shoot 63, but his eight birdies and an eagle were offset when his five-wood approach splashed into the lake at the front of the green at the par-five 18th.

"I really did give it a heck of a run, I had a good time. It was a wonderful day," said the three-time major champion, who faces his first winless year since turning professional in 1989 ahead of the season-ending Dubai World Championship later this month.

"I knew the pressure was on, I knew the situation, and for me this was a great preparation for the weeks to come. I can't think about the shot at the last. For me to come back all the way, to actually share the lead, was quite nice.

"I'm disappointed about that, but what I'm going to really think about is the 63 I shot."

American Ryan Moore carded a final-round 68 to finish two shots off the pace in third, while Northern Ireland's Rory McIlroy boosting his Race to Dubai bid after also shooting 63 to earn fourth place at 14-under.

He is now second on the Order of Merit money list behind Englishman Lee Westwood, who tied for eighth.

First-round leader Nick Watney, who also shared first with Woods at halfway, was fifth after closing with 71.

Woods was another shot back on 12-under after an uncharacteristic double-bogey at the par-four fourth hole, and he dropped another shot at 18 after hitting through the green and finding the water trap.

He was tied with Germany's Martin Kaymer (67), who was runner-up in Shanghai in the past two years.