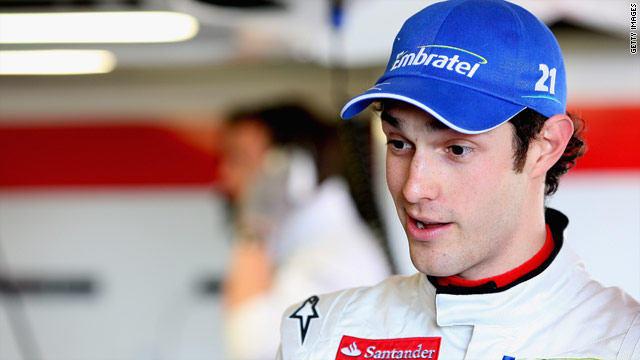 Bruno Senna is following in some famous footsteps after being confirmed on the Formula One grid for next season.
STORY HIGHLIGHTS

(CNN) -- Bruno Senna has been officially unveiled by new Formula One team Campos as one of their two drivers for the 2010 season.

Brazilian Senna, who narrowly missed out on a drive for Brawn GP after impressing them in testing last winter, is the first driver to be confirmed by one of the proposed four new teams on the grid; Campos, Manor GP, Loutus and USF1.

"I wanted to sign Bruno for my GP2 team a few years ago," team chief Adrian Campos told a news conference. "With little experience he lapped with Honda similar times to those of Jenson Button. The best from Bruno is yet to come."

Meanwhile, Senna himself has vowed to make a name for himslef in his own right next season, despite being the nephew of the late great Ayrton Senna.

"I hope, in a short time, that everybody remembers me for being Bruno and not for my uncle's surname," Senna told reporters.

"I've learned to live with it and although it helped me at the beginning to find sponsors and find contacts, to be a driver you need to have a natural talent.

"I want to score points for my new team and to be the best of all the new teams. Long term I would like to be Formula One world champion, it's not enough just to get there."

Senna is likely to be joined in the team by either Venezuelan Pastor Maldonado or Russian Vitaly Petrov after team principal Campos admitted his primary target was looking unlikely.

"I would like to have Pedro de la Rosa, but he is Spanish and the Spanish sponsors are crestfallen," Campos said.

"There are other options from Russia and Venezuela, but it all depends on the sponsor."