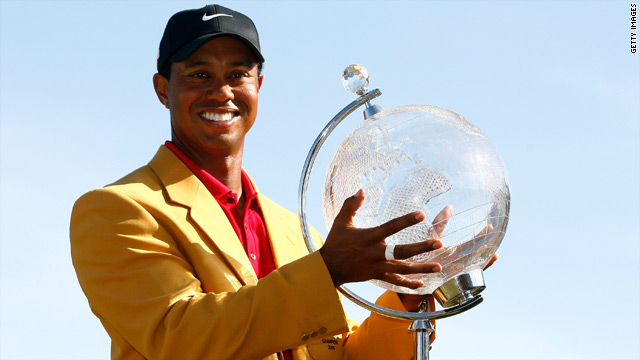 (CNN) -- World No. 1 Tiger Woods marked his first appearance in Australia in 11 years with his first tournament victory on the continent on Sunday.

The American bounced back from a disappointing showing on Saturday to cruise to victory by two shots at the Australian Masters despite being infuriated by an over-enthusiastic photographer at Kingston Heath in the state of Victoria.

The 14-time major winner's only dropped shot in his final-round four-under-par 68 came at the par-four 13th hole when he was snapped while in the middle of his approach shot.

"That got me right on my downswing," he shouted in dismay.

But Woods, who was paid a reported $3 million to play in the event and was tied for the lead after 54 holes despite his 72 on Saturday, bounced back with his fifth birdie of the day at the 15th hole.

"I said yesterday I was thankful I was still in the tournament, but I kept myself in it and it allowed me to go out today and go for the chance to win," said Woods, who attracted unprecedented crowds of more than 25,000.

"It was going to be tough today. I had to make some birdies early and I was able to do that and was able to keep it."

Greg Chalmers, who had also shared the lead along with fellow Australian James Nitties, also birdied 15 and followed Woods' lead by parring the last three holes to card 70 and finish second on 12-under 276.

Nitties finished fifth on 279 after carding four bogeys in his 73, with France's Francois Delamontagne (69) and American Jason Dufner (70) tied for third on 278.

The Australasian Tour tournament is co-sanctioned with the European Tour.