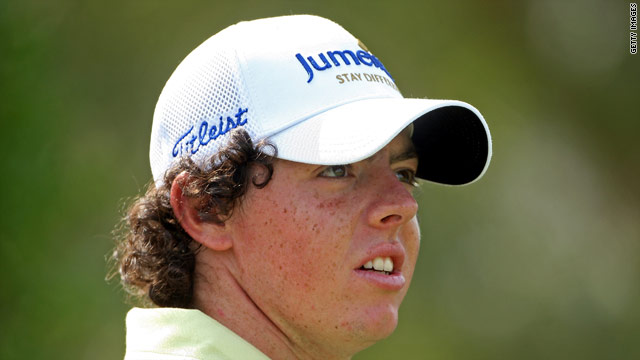 McIlroy practices in Dubai ahead of his bid to claim the European no.1 crown.
STORY HIGHLIGHTS

(CNN) -- Northern Ireland's Rory McIlroy leads a quartet of golfing stars who can land the inaugural Race to Dubai crown as the European season reaches its finale in the emirate on Thursday.

English pair Lee Westwood and Ross Fisher and German Martin Kaymer are also in contention to be European number one heading into the Dubai World Championship on the Earth Course at Jumeirah Golf Estates.

The tournament, which offers a winning prize of $1.25 million, features 58 of the top 60 players on the European money list following last week's Hong Kong Open.

American Ryder Cup star Anthony Kim and injured Englishman Paul Casey, who would also have had a chance of landing the number one spot and a $1.5 million bonus, have pulled out.

But much of the focus leading into the tournament has been on current money leader McIlroy, who at 20 would become the youngest golfer since Seve Ballesteros in 1976 to be crowned European number one, if he can hold off his challengers.

"I'm sort of just living out my dream and I couldn't be happier," McIlroy told www.europeantour.com as he completed his final preparations on Wednesday.

"To be sitting here now 13th in the world, leading the Race to Dubai, I'm just really enjoying it."

McIlroy, who won the Dubai Desert Classic earlier this year, has opened up a $191,000 lead over Westwood with five top-five finishes in his last seven tournaments, including second-places at the WGC-HSBC Champions and in Hong Kong.

"Because of all the money involved this week is going to be more exciting," added McIlroy, who is going to campaign on both the PGA and European tours next season.

The Dubai World Championship was originally billed as the richest golf tournament in the world with a $10 million prize purse and matching bonus pool.

But as CNN exclusively reported, organizers were forced to make a 25 per cent cut in both prize pools due to the economic downturn with the withdrawal of sponsors.

Former world number one Greg Norman, who designed the Earth Course, said professional golfers would have to face up to the realities of the global economic crisis.

"We golfers have got to step up to the plate and be alert to it," he said.

"We have all had to tighten our belts and I think it would be very responsible of the players to be cognizant of that."

Australian Norman, who took his first European Order of Merit title at the age of 27, is also a big fan of McIlroy.

"What Rory has been doing over the last 12 months is phenomenal to say the least," added the Great White Shark.

McIlroy and Westwood will be paired for the first round with Fisher and Kaymer also playing together.