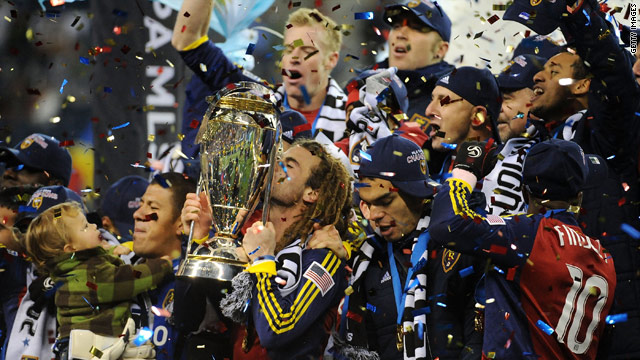 Kyle Beckerman of Real Salt Lake kisses the MLS Cup trophy as he and his teammates celebrate their win over the L.A. Galaxy in the MLS Cup final.
STORY HIGHLIGHTS

(CNN) -- Real Salt Lake sealed an upset win over the Los Angeles Galaxy on Sunday night with a 5-4 penalty victory, after extra-time in the Major League Soccer Cup final that ended with the score at 1-1.

Salt Lake's win at the Qwest Field arena in Seattle, ended David Beckham's bid to claim a third national title in as many different nations, having previously won the English Premier League with Manchester United and La Liga with Spain's Real Madrid.

The Galaxy struck first, with midfielder Mike Magee drilling a 41st-minute shot into an open net. His strike came after Beckham passed to Donovan, who set-up Magee at the far post. Seattle: America's soccer city.

Real Salt Lake hit back with 25 minutes left when Robbie Findley reacted first after Yuri Movsisyan's attempt on goal was blocked, tying the match and setting up the penalty shootout.

Beckham got the Galaxy off to a good start in the shoot out as he scored with confidence, but his team could not follow in the same manner.

I wouldn't say it's tougher to lose on penalties but it's Russian roulette, that's just the way it is
--David Beckham

Jovan Kirovski's shot was blocked by Rimando, but Saunders followed by stopping the effort of Salt Lake captain Kyle Beckerman before Donovan blazed over the crossbar to leave the score 5-4.

Galaxy came into the game as favorites, but flattered to deceive as it was revealed Beckham had played with an injured right ankle.

"We all want to win titles and personally I'd love to be successful but I think we have been successful this year without winning tonight," Beckham told reporters after the game.

"We have quietened a few people along the way which is always nice but we couldn't finish it off.

"I wouldn't say it's tougher to lose on penalties but it's Russian roulette, that's just the way it is. It's not a nice way to lose.

"The people that step up are brave enough to step up and if you score, great and if you miss it's hard to take, but it just wasn't our night," Beckham added.

Beckham is due to return to AC Milan in January for another loan spell as he bids to secure a place in England's World Cup squad for next year's finals in South Africa.

The English midfielder's future in the U.S. had appeared in doubt earlier in the season when his commitment was called into question following a loan spell with the Italian club during which he had indicated an apparent desire to continue playing in Italy.

Beckham had earlier said that playing in Sunday's final ranked alongside winning the Primera Liga title with Real Madrid in 2003 and a trophy-laden spell at Manchester United that included six English Premier League titles and the 1999 Champions League crown.

"Anytime you reach a certain part of the season, whether it's being in a cup final or winning leagues, it's always special," Beckham said. "Being involved in finals never gets old."