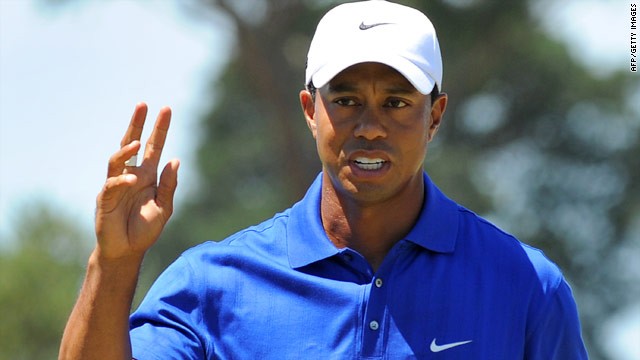 Tiger Woods can lay claim to being the most iconic sportsman the world has ever seen.
STORY HIGHLIGHTS

(CNN) -- Tiger Woods, who suffered minor injuries in a car accident Friday near his Florida home, is not only the greatest golfer the world has ever seen, he is a true sporting phenomenon and one of the most recognizable faces in the world.

The 33-year-old was the highest-paid professional athlete in 2008, reportedly earning an estimated $110 million from tournament winnings and endorsements.

Although Woods has yet to pass Jack Nicklaus' overall record of 18 Major tournament victories, he is currently on 14 Major wins, there is little doubt that the Florida native is one of the most iconic sportsmen that has ever lived.

Woods, who was nicknamed Tiger by his father Earl, who befriended a Vietnamese soldier of the same name, was destined from an early age to become a golfing great.

Before he could walk, the baby Woods -- aged just six months -- was already imitating his father's swing, and at the age of two he famously appeared on the Bob Hope show to display his already considerable golfing skills.

A year later, Woods played nine holes in a remarkable 48 shots and it was no surprise when in 1991 he became the youngest-ever winner of the U.S. Junior Championship at the age of 15.

In 1996, Woods turned professional and signed a reported $25 million five-year sponsorship deal with Nike, before claiming his first major with an astonishing 12-stroke Masters victory a year later -- the tournament's largest-ever winning margin.

Three more Majors followed in 2000, the U.S. Open, British Open and U.S. PGA, before winning his second Masters in 2001 to become the first player ever to hold all four Majors at the same time, dubbed the 'Tiger Slam'.

Success followed success through the decade with notable landmarks including breaking Byron Nelson's record for 114 consecutive cuts made on the PGA Tour while also passing the $40m career earnings mark in 2004 -- the year Woods married Swedish model Elin Nordegren.

The death of father Earl in 2006 prompted Woods to take a nine-week lay-off from golf, following which he missed his first cut in 38 Majors at the U.S. Open.

Woods became a father for the first time in 2007, when Elin gave birth to daughter Sam Alexis but in 2008 recurring problems forced him to undergo a third operation on his left knee.

However, he continues to dominate the world golfing scene and proved he has lost none of his brilliance earlier this month when winning the Australian Masters after being paid $3.3 million just to appear in the tournament.